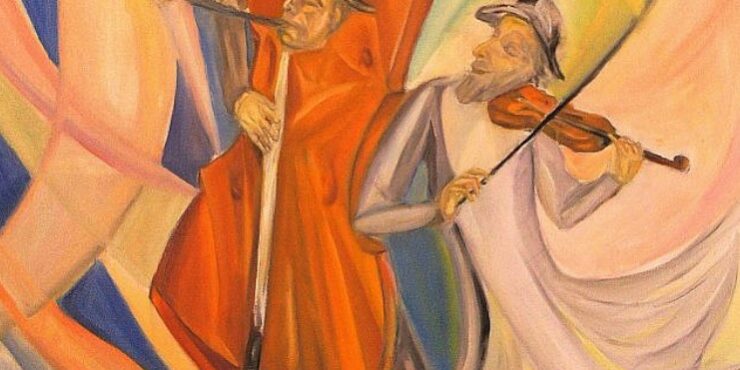 The Joy of Purim in Michael Rogatchi’s Art

In Jewish tradition, we have ten major holidays annually, with only two of them, Simcha Torah and Purim, is about exalted joy. And on Purim, that joy comes after miraculous rescue from a mortal danger and prospect of total extinction.

Many of us knew in generations that our Jewish joy is so often a joy mixed with tears, so often it contains an essential drama in it. We are genetically aware of the complexity of our joy, and many of us, also in generations, value it as a more precious gift in our lives, the same as it was known in our families and went back by generations.

And of course, the Jewish history, as the history of one big family, imprinted in our common psyche all these special marks of so many of our holidays made us to hold our breath, to pray ( including non-believers), and to have yet another layer of trials pushed onto us by those who toyed with an idea about world without Jews.

Of many and many terrible ‘specific-date’ pointed executions of Jews in Europe during the Holocaust, a horrific mass murder of over 5 000 men, women and children, with prevailing number of children there, many of them buried alive, in the Minsk Ghetto on March 2nd, 1942, on Purim, stands apart in its volume and cruelty.

Of all Jewish holidays, for some reason, Hitler and some close to him butchers were obsessed with Purim of all ten of our holidays. From the fierce ban of Purim from 1938 onward by Hitler personally, through repeated return to the theme of Purim in particular in his speeches during WWII, highlighted by his hysterical warning in an important radio-broadcast in January 1944, when he started to realise that he was losing big. What was on his devilish mind? That the Jews ‘could celebrate their second triumphant Purim festival!’ When a psycho is in a panic, he turns a seer.

And of course, that most striking sample of Purim’s miracle in our times when ten of modern-time sons of Haman, in capacity of highest the Third Reich officials, were hanged in October 1946 after the Nuremberg Trial, with the eleventh of those convicted to this punishment, Hermann Göring, committing suicide, in an incredible parallel to what has happened to the Haman’s daughter, the eleventh from his and his wife’s children of that vile family. That’s why the episode of the ten top-Nazis’ hanging in 1946 is marked in history for good by the terrified scream of one of them, Julius Streicher, the notorious publisher of Der Sturmer and the evil who personally ordered destruction of the Great Synagogue of Nuremberg in the Kristallnacht pogrom. When Streicher got on the platform just before being hanged, he screamed “Purimfest!” . Indeed, it was – and the day, October 16, 1946, was actually Hoshana Rabbah, the day of final judgement in a Jewish year. I always wished so much that Hitler was next to them on that platform on that day. And so many others, as a matter of fact who never got their punishment. Continue Reading….