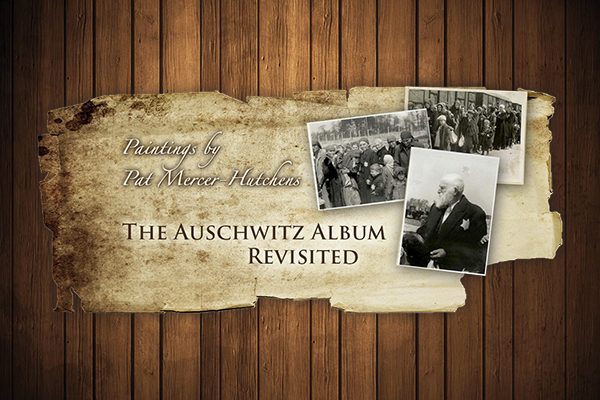 The late Pat Mercer Hutchens, teacher and accomplished practicing artist, completed a series of forty paintings to remember and honor those who perished in the Holocaust. All the paintings were motivated by the Auschwitz Album, the only surviving photographic evidence of Jews arriving and being “processed” at a Nazi death camp.

Although the historical purpose of the Auschwitz Album is unknown, the photographers were most likely SS officers given the task of taking photo IDs of inmates. The existence of the album is peculiar since the Nazis were careful to keep the Final Solution a secret. In 200 photos, the Auschwitz Album documents the arrival of Hungarian Jews from Carpatho-Ruthenia in the early summer of 1944. The photos show thousands of Jews arriving in box cars and disembarking on the train ramp. On their coats are the infamous yellow stars, and in their hands they carry tiny parcels.

The photos show the Jews being separated into “fit to work” and “not fit to work” groups. Those “fit to work” were registered, deloused, and robbed of all their personal effects before being lined up and herded into the labor camps. The “unfit to work” included the elderly, children, and pregnant mothers. The SS officers ushered the “unfit to work” to waiting groves behind the crematoriums. They were ordered to wait further instructions until, group by group, they were ushered to the gas chambers under the guise of taking a harmless shower. In the pictures, the victims’ expressions give no indication that they knew what was about to happen to them—no understanding that these were their final moments.

Lilly Jacob-Zelmanovic Meier recently donated the album to Yad Vashem, the Holocaust museum in Israel. Lilly, a Holocaust survivor, found the album on the day of her liberation in a cupboard in an abandoned SS barracks. Providentially, the album contained the last pictures of Lilly’s family and friends, right before their extermination.

Pat, the artist behind the paintings, particularly focused on the women and children in the Auschwitz Album. “I know well the heart of a loving, protective mother who would gladly give every bone in her body to save her babies.” Pat said. “May their God and ours use these paintings for His eternal purpose.”

When Pat first began working on the Auschwitz Album Revisited she had recurring nightmares. She dreamed she was wandering through the concentration camps with children dying all around her. “I tried to resuscitate one child after another, but nothing I did brought them back to life,” Pat said. When she awoke, she felt compelled to paint. Only through art did she feel like, in some form, she could give the victims life again, preserve their memory, and mark their last breaths.

First, Pat painted from one of the Auschwitz Album photos which showed a woman holding a child and looking through the train window. Then she painted three women whose hair had been crudely chopped and who were forced to change into sack dresses.

Even after being diagnosed with cancer herself, and enduring three years of chemotherapy, Pat continued to paint. She painted a woman holding a sack of challah bread on the train ramp, a grandmother standing in line for extermination with her grandchildren, an elderly man walking in solitude to the gas chamber, and two rabbis standing together in stunned silence.

While Jews have responded through art and literature to the horrors of the Holocaust, the Auschwitz Album Revisited is a unique expression of empathy on the part of a Christian artist. Pat’s colleague summarized the exhibit saying, “Even though the darkness of the Nazi regime is accounted for in these paintings, what comes through in the eyes of the victims, and through the loving hand of the artist, is the essence of the God of light.”

As anyone can see from these paintings, Pat held a light inside her that kindled the flame of her passions and commitment for Israel and the Jewish people. We at The Jerusalem Connection press on in her work and continue her amazing legacy.

Visit Our Store by clicking here to order prints of the Auschwitz Album Revisited! Also, you can gain insight into each painting by reading Pat’s descriptions.