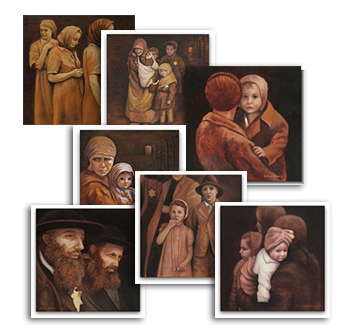 Jerusalem Connection is participating in a major event this upcoming spring on Holocaust Remembrance Day in South Carolina.

As many of you know, Pat Hutchens spent the last several years of her life dedicated to memorializing and honoring victims of Auschwitz through painting. In her work, The Auschwitz Album Revisited, Pat studied the 193 black and white photographs from the Auschwitz Album, the only surviving visual evidence of the horrific selection process conducted by the Nazis at Auschwitz-Birkenau. Pat studied the photographs taken by an SS officer and felt compelled to paint their portraits. Whereas the photographs from the Nazi officer captures hundreds of Hungarian Jews as they deboard the cattle cars and are separated into “fit for work” and “not fit for work” lines, Pat’s portraits honor the humanity of each victim as individuals. Pat’s stated goal was to “create monuments of remembrance through art.” As Pat battled ovarian cancer and endured three grueling years of treatment, she never stopped painting, not until her own homegoing in 2014.

One of the last events we at Jerusalem Connection were able to do with Jim, before the start of the pandemic, was an art exhibit of the originals from The Auschwitz Album Revisited at Liberty University. On April 28, 2022, the originals will once again be exhibited at the North Charleston Performing Arts Center. The art will compliment a majestic concert by Israel’s Violins of Hope and Varna International.

The violins are all from the collection of Amnon and Avshalom Weinstein, father and son violin makers, who have lovingly restored violins, cellos, and violas that belonged to Jewish people during the era of the Holocaust. Some were given to Violins of Hope from Holocaust survivors. Some were donated by family members of victims of the Holocaust. One of the violins was found buried under the snow in Holland. One was thrown from a cattle train. One was used in a concentration camp orchestra.

Violins of Hope beautifully explains the heart behind the concerts:

The Nazis used music and especially violins to humiliate and degrade Jews in ghettos and camps. They confiscated many thousand instruments of Jews all over Europe. Our concerts are the ultimate answer to their plan to annihilate a people and their culture, to destroy human lives and freedom.

The sound of violins is often compared to the beauty of the human voice. When played with talent and spirit, it is known to reach out and touch hearts. This was the role of violins in the war – to touch hearts, kindle hope for better times and spread it around. Wherever there was music, there was hope. Violins of Hope is not only a memorial to lost culture and people, it is also an educational act that reaches young students and adults wherever our concerts are performed.

With that goal in mind—honoring the lost and educating the living—Jerusalem Connection will offer another educational tool of remembrance to South Carolina. The originals will be transported from Liberty University to Charleston to be exhibited as part of the Violins of Hope concert. Giclées of the paintings will be exhibited in three other South Carolina concert locations. I will share the story of The Auschwitz Album Revisited in local schools, churches, and at the Charleston concert. We will also use the booklets as another way in which participants can continue to learn and process the horrors of the Holocaust. As antisemitism is once again on the rise even in the United States, we believe remembering is an important act in resistance.

As an organization we will incur some logistical expenses participating in an event of this caliber. We have started a designated fund in honor of Jim and Pat Hutchens called the Holocaust Education Fund. This fund allowed us to design and print 3,000 of The Auschwitz Album Revisited booklets. This fund will now be used to frame, display, and print high-quality giclées that can be exhibited at less secure sites with no risk to the originals. Please consider joining us in South Carolina and/or donating to our Holocaust Education Fund.