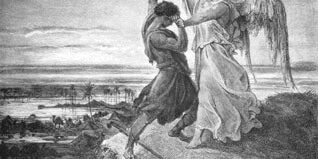 The nation of Israel was born out of struggle. From the womb, Jacob was engaged in a struggle with his brother for the birthright. He cheated, prevailed, and fled his home. Then, for seven years, he was engaged in a second struggle with his uncle for the hand of Rachel in which he was cheated. Another seven years and he prevailed against his uncle not only to wed Rachel, but to acquire a large amount of his flock. He then fled. This time he fled back home, and he is faced with an unavoidable meeting with his brother. The night before his confrontation with Esau, alone in the dark, Jacob wrestled with a stranger. Jacob’s last struggle described vividly in Genesis is the simplest in grammatical form (wrestling-lehavek), but it is eight verses have a meaning that cannot be given one answer.

As Jacob, a man who has consistently shied from confrontation, was about to confront his brother when he was met by a divine being. There are many interpretations as to the divinity of this divine being, and because of the Bible’s vagueness on this being’s identity, the reader has a lot of freedom to interpret this story as he chooses. The most meaningful interpretation is that this divine being symbolizes Jacob’s two-sided conscience. The physical struggle between Jacob and the divine being represents Jacob’s mental struggle between his avoidance of confrontation and disadvantaged conscious, and the part of him that carries the burden of God’s promise and must strive fairly with God and men. The latter wins out as he emerges a better or more complete man, as evidenced using the word Shalem (Gen 33:18). There is no cheating or deceiving. Jacob wrestles with this divine being until dawn. Jacob forces him to give a blessing before he lets him go. The divine being asks for Jacob’s name and this time Jacob answers truthfully. To symbolize this change, from a deceiving and shy boy to a man prepared to wrestle fairly with his problems, Jacob is given a new name, Israel. This name does not represent the end of the struggles for the nation of Israel, but it means that through their struggles with God and with men, they will prevail. God will be with them.

All of Jacob’s life he fought like an underdog. He cheated and fled from his struggles. When God met him in Bethel the first time on a stairway spanning from earth to the heavens, He reassured Jacob that he is carrying God’s promise. God is on his side; he is no longer an underdog, and not at a disadvantage.