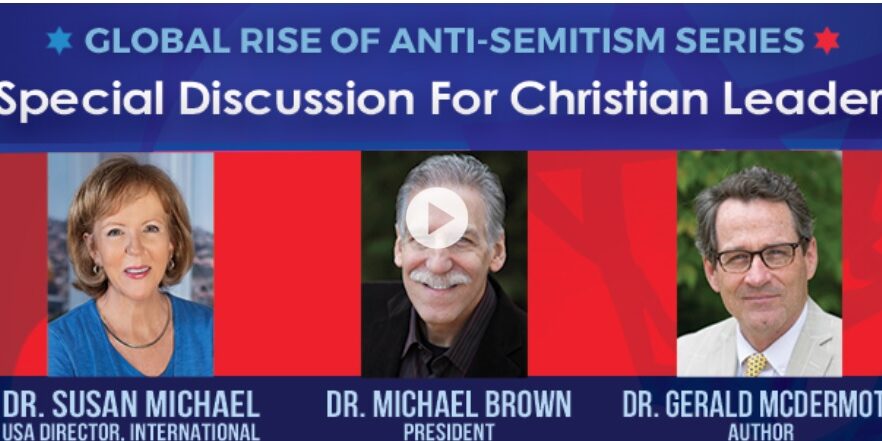 Over recent weeks, the USA Branch of the International Christian Embassy Jerusalem gathered over 400 pastors and Christian leaders for an informative series of webinars discussing the explosive growth of anti-Semitism in the United States. Organized in collaboration with eight other organizations under the banner of the American Christian Leaders for Israel (ACLI) network, the webinars were designed not just to educate but to begin a national conversation among Christian leaders about the problem and how to collaborate and mobilize against it.

Last year, the Anti-Defamation League (ADL) recorded more incidents of assault, vandalism, and harassment against American Jews than in any year since they began tracking such incidents in 1979. Since then, coronavirus conspiracy theories have blamed Jews for the pandemic—to either dominate the world or make money off the antidote—and many protestors chanted anti-Israel and anti-Jewish slogans in the streets.

“How could this be happening in the United States, where support for Israel and the Jewish people—from the president and Congress down to thousands of churches and millions of citizens—is so strong?” asked ICEJ USA National Director Dr. Susan M. Michael. “This rise in anti-Semitism is alarming. However, what has me the most concerned is the lack of outrage against it.”

The webinars were the first step in bringing greater awareness to anti-Semitism by allowing experts to discuss the problem and recommend solutions. Speakers included US State Department Special Envoy Elan Carr and US Commission on International Religious Freedom member Gary Bauer speaking about the US government response to the global phenomenon.

Carr described the problem as coming from the far right, far left, and Islamists. US government policies aim to help provide physical safety for places of worship, to fight hate crimes, and to promote the International Holocaust Remembrance Alliance (IHRA) definition of anti-Semitism.

In the second webinar, Alyza Lewin of the Brandeis Center for Human Rights Under Law (LDB) described the problem Jewish students are facing on campuses, where a fundamental part of their ethnic identity as Jews—Zionism—is attacked. Liora Rez, cofounder of stopantisemitism.org, also addressed how anti-Semitic tropes proliferate on social media and influence many spheres of society.

The next webinar focused on vulnerabilities within the Christian community. Dr. Michael Brown discussed what we can learn from the error of anti-Semitism in Christian history, while Dr. Gerald McDermott covered the fallacies of Replacement Theology, which was the theological seedbed for centuries of Christian anti-Semitism.

Mr. Noam Katz, Deputy Director General, Israel Ministry of Foreign Affairs, led the closing session—a discussion of how anti-Semitism affects Israel in the international arena. The series ended with a conversation among the Christian leaders on unifying against this hatred.

“While the webinars were a first step in a campaign of increasing awareness, it was a major step forward,” said Michael. “We will build on this foundation in the coming months and year, and with God’s help, we will make sure this evil ideology does not take root in American society.”

Recordings of the webinars are available here.

A free downloadable booklet ACLI put together on the subject is found here: http://aclforisrael.com/anti-semitism-booklet