A Watershed Moment for the Middle East 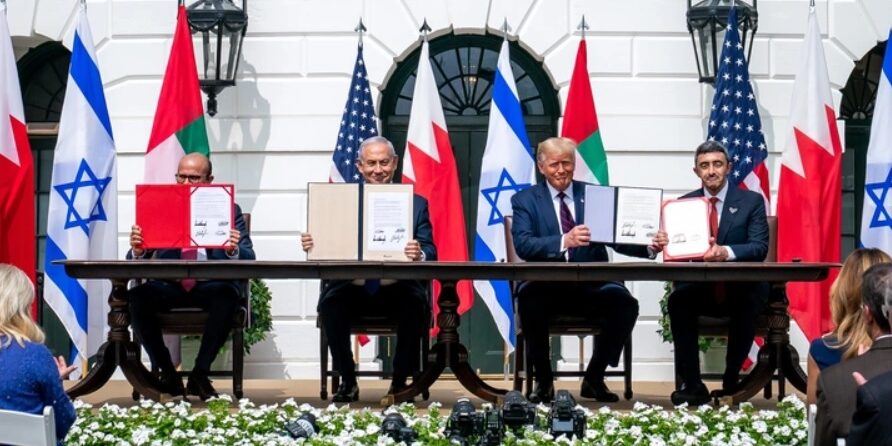 Israel’s new agreements with the United Arab Emirates, Bahrain and Sudan, new agreements for airline overflights of countries with which Israel has no new peace or economic pacts, a new aviation agreement with Jordan and general Saudi and Egyptian approval have brought what many are calling a “watershed moment.”

That “watershed” is the potential splitting of the Arab consensus on “Palestine,” as Arab countries weigh continued rejection of the state of Israel against the realities of life in the Middle East.

The “moment” began with President Obama’s 2009 Cairo speech, the disastrous “Arab Spring” of 2011 and the Obama administration’s determination to “win” Iran back into the regional community while giving its regime access to Iraqi territory and fighters.

The Arab Spring did not go as the Obama administration hoped it would; it turned ugly. It removed the government of Hosni Mubarak (with American help) and created the terror of a Muslim Brotherhood state that was itself ousted in 2013. Libya (under American military assault) crashed in 2011 and the wars since then have killed thousands, wrecked industry, fueled the migrant crisis and provided weapons for ISIS and al Qaeda in Syria. And, of course, in Syria, the promise of the Spring encouraged the uprising that led to the civil war (in which the U.S. supported and armed militias that it did not understand) that killed more than 600,000 people, displaced more than half of the Syrian population and included the use of poison gas. Much of this was funded by Iran’s largesse (which was partially American largesse).

American policy frightened governments around the region. The Gulf States, Saudi Arabia, Sudan, Tunisia, Morocco, Iraq, Lebanon and Jordan don’t want to be like Syria, if they have a choice. They do, and American changes of leadership won’t change that.

For countries around the region, the allure of war and the ideological principle of the demise of Israel pales in comparison with figuring out how to stay in power and determine the role of the people under their systems of government. Technology, water and the fight against Iran’s export of radical ideology—both Shiite and Sunni—are other priorities, and Arab states are beginning to see Israel as a potential partner in their pursuit.

The change can be seen in Jordan, starting with the unexpected Jordan-Israel aviation accord. The Jordanian cabinet recently put out a press release on its priorities. COVID-19, not surprisingly, is first, followed by bolstering growth, streamlining the public sector and reducing debt, combatting tax evasion and administrative corruption, developing a social safety net and restructuring the energy and public transportation sectors.

That list could have been produced by any Western country—and many non-Western ones. But where are the Palestinians? Where is Jerusalem? Where is war?

At the tail end you find:

Reaffirming commitment to the Palestinian cause and the Hashemite Custodianship of Jerusalem’s Islamic and Christian holy sites, the prime minister said the government will continue to focus on joint Arab action.

This commitment is not to Palestinian leadership and there is no pledge of resources. There is no “right of return” or destruction of the state of Israel. And “Hashemite Custodianship” of holy sites is a flat rejection of Palestinian control. “Joint Arab action” these days has a lot to do with self-preservation and not much with Palestinian statehood.

Saudi Arabia is not entering peace talks with Israel thus far, but has displayed enthusiasm for the arrangements reached and maintains a quiet conversation with the Israeli government. Prince Bandar bin Sultan, who has served as ambassador to the U.S., director general of the Saudi Intelligence Agency, and head of the National Security Council, gave a startling interview in Al Arabiya:

We are at a stage in which rather than being concerned with how to face the Israeli challenges in order to serve the Palestinian cause, we have to pay attention to our national security and interests. New players came into the picture, claiming that they are serving the Palestinian cause and that the Palestinian cause is their priority, and that Jerusalem is their first goal. These are countries such as Iran and Turkey, and the Palestinian leaders have come to regard Tehran and Ankara higher than they regard Riyadh, Kuwait, Abu Dhabi, Dubai, Manama, Oman, Muscat, and Cairo….

We live in this challenging era, and the duty of our leaders is to preserve our national security and the security, economic, welfare, and social interests of our peoples. We are surrounded by a stormy sea all around us, and we… owe it to our peoples to maintain this situation that we live in.

If you listen closely, the neighbors are whispering, “Inshallah.”