Thursday, May 28th, is the first night of Shavuot. Our friends at the Rogatchi Foundation are offering Jerusalem Connection readers a special chance to win a unique piece of Jewish art if you can answer a piece of Jewish holiday trivia.

On Shavuot, Jews celebrate the events that took place on Mount Sinai. The Bible recounts that fifty days after the Hebrews were miraculously rescued from slavery in Egypt, Moses revisited Mount Sinai. As you may recall, Mount Sinai is the same humble spot where God first spoke to his faithful servant through the burning bush.

In Exodus 19, we learn that when God descended on the mountain, thunder ripped through the sky and the mountain shook. A shofar blew a long blast. A dense cloud of smoke and fire surrounded the mountain top. When Moses was on the mountain, God warned that no one, not even the animals, were to touch the mountain or it would be certain death. But God’s promise to them was that if they kept His covenant than they would be a “kingdom of priests” among the nations.

As you can see, Shavuot is no small holiday. This is a huge moment being recognized in the story of Israel as a nation. 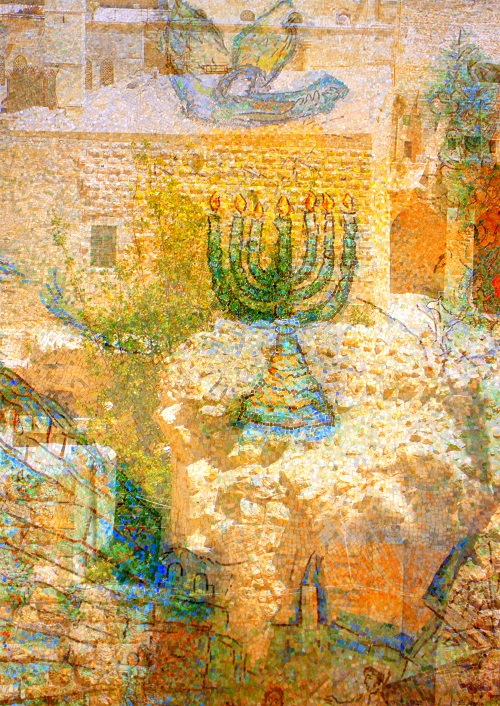 There is a special account in the Jerusalem Talmud about Elkanah, the father of Samuel, the biblical judge and prophet. In the Talmudic teaching, Elkanah was blessed with being the father of Samuel the anointed because Elkanah pleased God by making regular pilgrimages to the Tabernacle in Shiloh. The Talmud says Elkanah campaigned to bring the entire Jewish people to Shiloh. He is memorialized as a great leader because of his intent to encourage all Israelites to go up to Shiloh where God’s presence rested on the Tabernacle for over three hundred years.

The Jerusalem Talmud specifically states that Elkanah went to Shiloh four times a year. But, why four times? According to the Torah, there are only three holidays on the Jewish calendar that require the Israelites to make a pilgrimage: Passover, Shavuot and Sukkot. Elkanah apparently took upon himself an additional fourth pilgrimage to Shiloh every year as a present (נְדָבָה) to God.

The Jewish sages learned that Elkanah went to Shiloh four times a year from the verse, “And the man would ascend from his city, as was his custom, to bow down and bring sacrifices to the God of Hosts in Shiloh” (1 Samuel 1:3). But, how did they get four when the passage only indicates that Elkanah went to Shiloh from time to time to fulfill his vows and bring sacrifices at the Tabernacle?

The question that the Rogatchi Foundation presents to you, all our Bible enthusiasts, is this: How do we know, or how did the Jewish sages deduct, that Elkanah went to Shiloh four times a year?

Our friends at the Rogatchi Foundation are offering a special art prize to the first person who can answer this question. Michael and Inna Rogatchi are world famous Jewish artists living in Finland. They have been partners with Jerusalem Connection and close friends of all of us for many years. They were critical in curating and sharing the Auschwitz Album Revisited series in both Ukraine and Poland and they recently flew to Washington DC to present Jim Hutchens with a lifetime achievement award. Trust me, you will not want to miss this opportunity. They are generously offering that the first person to answer the Shavuot quiz will win a special piece of original Judaica art by them. They are prepared to have more than one winner!

The artwork, pictured here, is called Chagall’s Dreams, Flying Over Jerusalem. It is a fine art photography collage from their 2016 to 2020 and it is a Limited Edition.

Please email your answer by May 28 to Inna at office@rogatchifoundation.org

Also, please mark May 28th on your calendar as a special and holy day for both Jews and Christians!

Journeying back to where it all started: Revisiting the Egyptian Exodus
April 13, 2022

Donate a Copy of Beyond Combat
February 18, 2022
Hanukkah in Ancient and Modern Israel: “A Great Miracle Happened There”
December 3, 2021