EU: We will not recognize any changes to ‘1967 borders’ 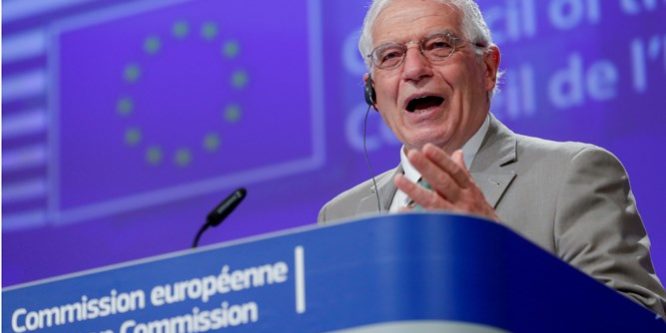 The European Union’s High Representative for Foreign Affairs, Josep Borrell, on Monday congratulated the new Israeli government but also made clear that the EU will not accept an Israeli move to apply sovereignty over parts of Judea and Samaria.

“The European Union congratulates the new government in Israel. Israel is a key partner for the European Union. We look forward to continuing working with the Israeli government in a constructive and comprehensive way, in the spirit of the longstanding friendship that binds us to Israel, in order to develop our relationship in all areas, in particular in matters such as COVID-19, education, research and development and any other area of mutual interest,” Borrell said in a statement.

He made clear that the EU “is willing to support and facilitate resumed meaningful negotiations between the two parties, to resolve all final status issues and achieve a just and lasting peace. We stand ready to engage immediately with the new government and with all relevant stakeholders.”

Borrell also said that “international law is a fundamental pillar of the international rules-based order. In this respect, the EU and its Member States recall that they will not recognize any changes to the 1967 borders unless agreed by Israelis and Palestinians. The two-state solution, with Jerusalem as the future capital for both States, is the only way to ensure sustainable peace and stability in the region.”

“In this vein,” he continued, “we note with grave concern the provision – to be submitted for approval by the Israeli cabinet – on the annexation of parts of occupied Palestinian territories, as stated by the Prime Minister when presenting his government to the Knesset on 17 May and as envisaged in the coalition agreement signed earlier. We strongly urge Israel to refrain from any unilateral decision that would lead to the annexation of any occupied Palestinian territory and would be, as such, contrary to International Law.”

The coalition agreement between Prime Minister Binyamin Netanyahu and Blue and White chairman Benny Gantz states that the government could apply sovereignty to parts of Judea and Samaria this coming July.

Borrell recently warned Israel against applying sovereignty over portions of Judea and Samaria.

“The European Union reiterates that any annexation would constitute a serious violation of international law. The European Union will continue to closely monitor the situation and its broader implications, and will act accordingly,” he said.

On Friday, Borrell said that the EU will make a diplomatic push to try to stop Israel from going ahead with the plan to apply sovereignty.

The EU’s foreign ministers met via video on Friday to discuss Israel’s sovereignty plan, but no agreement was reached on actions against Israel should it go forward with the move.

On Saturday, Luxembourg’s Foreign Minister Jean Asselborn said that EU countries are planning to warn Israel against annexation but added, “We are not talking about sanctions. We’re talking about prevention. This text is not aggressive.”

Category: Judea and SamariaBy The Jerusalem ConnectionMay 18, 2020Leave a comment