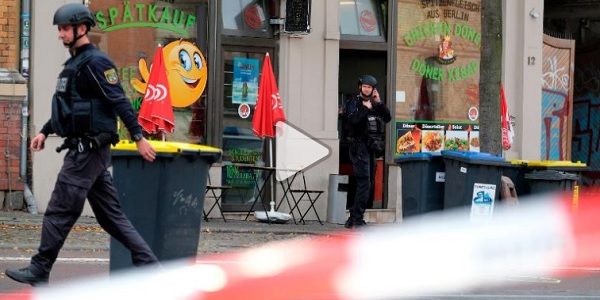 Two people have been killed in a shooting rampage near a synagogue in the eastern German town of Halle, according to local police.

One woman was killed close to the town’s synagogue around midday local time on Wednesday, before a gunman opened fire at a kebab shop roughly 600 meters away, fatally wounding a man. A 35-minute video has been posted online that appears to have been filmed by the gunman.

A police search for the perpetrators is now underway. At least one person is on the run and local residents were urged to seek safety, as the attack may have involved as many as three suspects, according to the Federal Criminal Office.

One suspect has been arrested. A spokesman for the German federal prosecutor identified the suspect as “Stephan B.” and said he is 27 years old.
By Wednesday afternoon, a police operation was underway in the small village of Wiedersdorf, around 14 kilometers (8.6 miles) east of Halle, according to CNN’s German affiliate, n-tv.

Several people were also injured in what local authorities described as a “rampage.” The incident near the synagogue comes on Yom Kippur, the holiest day in the Jewish calendar.

A German security official told CNN that “investigators believe the shootings in Halle were motivated by far-right ideology” based on what they have learned so far.

German Chancellor Angela Merkel expressed her “deep condolences to the family of the victims,” government spokesperson Stephen Siebert tweeted.
“Our solidarity to all Jews on the holy day of Yom Kippur. Our thanks to the security forces who are still on the case,” Siebert said. Continue Reading…