The Shofar of Auschwitz 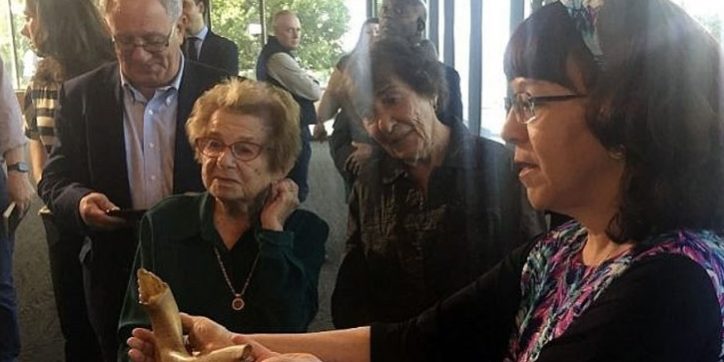 Rosh Hashanah, 1944: A group of ragged Jewish prisoners assembled for yet another exhausting work detail. All around, Jews were starved, tortured and murdered. The slightest expression of Jewish faith was strictly forbidden, grounds for execution by Nazi guards.

Yet on that Rosh Hashanah, a group of courageous Jews managed to pray with a minyan. Miraculously, they even managed to blow a shofar and evade detection. Prof. Judy Tydor Schwartz, the Director of Holocaust research at Bar Ilan University in Israel, is the daughter of the man who facilitated that astounding feat. In an Aish.com exclusive interview, she described her remarkable father, Chaskel Tydor, and his shofar.

When World War II broke out, Chaskel was 36 and living in Frankfurt with his wife Bertha and young children. They managed to send a son and daughter to relative safety in Belgium on the Kindertransport, a scheme that allowed Jewish children to escape Nazi Germany in 1939. Later that year Chaskel was arrested and sent to Buchenwald concentration camp; in 1942 he was sent to a forced labor camp near Auschwitz. There, he learned that Bertha and other relatives had been murdered in Auschwitz.

Though he briefly succumbed to despair, Chaskel soon found meaning in helping others. “He had done all he could to save lives and help as many as he could retain their spirits and religious beliefs,” Prof. Tydor Schwartz said. “He sent friends mishloach manot (gifts of food) on Purim when it meant he went without food to do so. He secretly lit Chanukah candles. He taught Pirkei Avot (Ethics of the Fathers) secretly in Buchenwald and later in Auschwitz.” Continue Reading….