The Third Temple: A Sign of The Coming Messiah 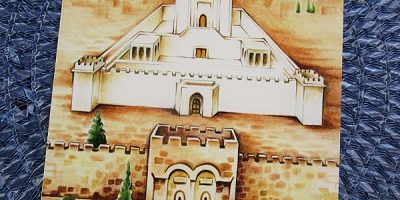 In The Third Temple: A Sign of the Coming Messiah, Daniel Goldstein will take the reader on a journey through the pages of the Bible and along the path of history with a focus on Jerusalem, the Temple Mount, and specific prophecies about a Third Temple. Through careful observation of the prophecies found in the Bible, Daniel Goldstein will examine the facts regarding a Third Temple together with the biblical signs of the coming of the Messiah. Although some biblical prophecies appear to be cryptic and challenging to the average reader, there are many biblical prophecies that are easily understood and provide literal signs of the coming of the Messiah.

The “Seventy-Weeks Prophecy” found in the book of Daniel together with several key prophecies found in the New Testament provide a roadmap for navigating the signs of the coming of the Messiah including the Third Temple, which will be one of the most significant signs.

Jerusalem Connection is offering this book, The Third Temple: A Sign of the Coming Messiah by Daniel Goldstein for a suggested donation of 25.00 for our supporters and listeners. Due to the high price of postage, we are limited to addresses inside the United States. Click on the link below to order online or mail your donation to our offices with a note requesting the book.
The Jerusalem Connection, International
P.O. Box 20295
Washington, D.C. 20041

Please read this book and let us know what you think about the Third Temple and the Messiah.