Muslims Still Trying to Keep Messiah Out of Jerusalem 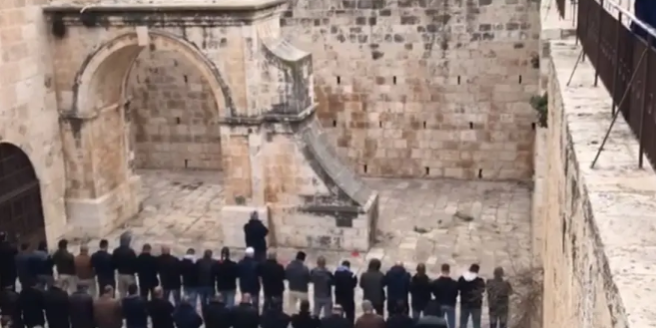 Thousands of Palestinians, chanting “Allahu Akbar!” (Allah is great) and waving Palestinian flags broke through into the Golden Gate area that leads up to the Temple Mount over the weekend.

Israel had closed the area by court order in 2003 after Hamas and the Islamic Movement activists engaged in subversive activities against the state. Sheikh Abdel Azim Salhab, chairman of the Islamic administration of the Muslim religious areas on the Temple Mount, praised the Palestinians for using force to enter the Golden Gate site. He said they were now moving to open the way for Muslims to enter on a daily basis.

Abdel Kader, the senior Fatah (PLO) official, said that Friday’s events on the Temple Mount were part of an effort “to stop settlers from defiling al-Aqsa Mosque.” He said that the Palestinians who stormed the Golden Gate, “scored a big victory on behalf of all Arabs and Muslims.”

The area known as the Golden Gate is one of eight gates in the walls surrounding the Old City of Jerusalem. The Golden or Eastern Gate faces the Mount of Olives and allows the most direct access to the exact spot where Solomon’s Temple stood. In Hebrew it is called Sha’ar Harachamimi, “Gate of Mercy,” because of its proximity to Holy of Holies and the Mercy Seat. To this day it remains one of the most important places for Jewish prayer. Continue Reading…