The Third Jihad: A Review 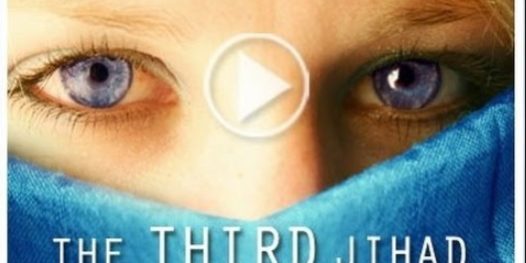 Watch the documentary for free at Democracy Under Attack

The Third Jihad covers a different aspect of Islam’s attempts at taking us over. Whereas “Obsession” concentrated on the violence against Western Civilization with America being central to that attack, this film concentrates almost entirely on the strategy to turn America into an Islamic country bound by Sharia law, without violence. This film takes a look at the more sinister underlying and acceptable part of Islam that wants to conquer through the peaceful transition from democracy to Sharia law.

What is so diabolical is that these Muslims are not al Queda, Hizbollah or Islamic Jihad. They are homegrown, work within the system, using democratic principles to spread their ideology.

This is the non-violent component of The Third Jihad, the constant pressure upon Western governments to accommodate Muslims along with the active proselytizing of Christians and Jews in Western countries, the end result is to establish a worldwide caliphate. That is a world which is totally Islamic and run by Sharia law, with all the oppression that system applies to women, gays, Jews, Christians, and the life threatening aspects to all those who do not bend to the Islamic will.

The film begins by introducing Zhudi Jasser an American Medical doctor, immigrated from the Muslim world and acts as the narrator of the film. Dr. Jasser like so many other honorable Muslim people tries to convince the more impressionable coming out of the Madrassas and the universities that the west is not their enemy and it is wrong to distort certain sections of the Koran and kill in Mohammad’s name.

There are handful of brave Muslim people speaking out against the insanity and trying to warn a lythargic west that the Jihadi threat is real. Noni Darwish, Walid Phares, Sari Nusseibeh, Walid Shoebat, along with Jasser , act like the prophets of the old testament, warning us about something, but are we listening?

One of the trademarks of the Shore/Kopping enterprise is the commentators that appear in their films. Experts in their fields, they make a strong case for the film’s thesis. One of those is Bernard Lewis, Professor Emeritus from Princeton University. Dr. Lewis is one of the foremost authorities on Islamic history in the west. He is also one of the few Islamic historians in western universities that does not apologize for Islamic transgressions against democratic institutions. Dr. Lewis gives a different but very cogent academic view of this part of world history. He calls the problem a “cosmic struggle between two religiously defined civilizations,” Christianity and Islam.

He explains the rapid spread of Islam during the 7th and 8th centuries when the “Arabs came out of Arabia and moved into the Fertile Crescent, the spread east through Iraq and into modern day Iran, central Asia and India, west through Syria, Palestine, into Egypt and across North Africa, and then into Europe where they conquered Spain and Portugal and ruled Italy for quite awhile.” Dr. Lewis’ analysis for this rapid spread of the religion, “it was obviously not done by peaceful persuasion.” That was the first Jihad.

The second Jihad was the rise of the Ottomans when Islam spread to the outskirts of Vienna before they were turned back. And, again you are left thinking that without a war stance put up by the Europeans, Islam would not have been stopped at Vienna in 1683.

Zhudi Jasser then comes on the screen and tells the audience that we in our time are living through the Third Jihad, because “we are in the third and final phase of their mission to bring about the domination of their version of Islam.” All the while little red crescents are being super imposed on a map of first Asia and Africa and then a larger section with Constantinople at the center and finally when talking about the Third Jihad the whole world is covered with them.

It’s a chilling reminder that Islam was born to conquer and continues to do that in the 21st century.

One of primary tactics of American Muslim organizations is deception. These organizations and the people that run them use our democracy to further their aims. Meanwhile, people in America and in the west are not noticing what is going on in their democratic systems.

One of the deceivers showcased in this film Abdul Rahman Alamoudi. For those old enough to remember the prayer service that President Bush held about a week after 9-11 and he had some interfaith leaders behind him on the dais. The Muslim representative was Alamoudi. He spoke in honor of the victims of the attack all the while probably feeling victorious inside that America was paying for its crimes against Islam.

He was implicated in the assassination attempt of the Saudi Crown Prince Abdallah , has openly campaigned for some of the worst terror organizations in the world, at the same time snuggling up to heavy weight politicians in Washington in both parties, serving President Clinton as Islamic advisor and worked with Grover Norquist and had a close relationship with President Bush.

Alamoudi advocates violence against Americans, against Jews and others he calls enemies in the Middle East. He has openly campaigned in public for Hamas and Hezbollah and the killing of Jews in Israel.

Alamoudi was convicted on a number of charges in 2004, relating to the crimes listed above and is now in jail. Alamoudi got caught. Here are the questions we should be asking and demanding answers to. How many more Alamoudi’s are out there, scheming, working under the radar, constantly undermining the democracy of the United States, feeding America’s enemies, and spreading The Third Jihad? What is so wrong with our immigration system that allows an enemy like Alamoudi to enter this country in the first place?

Allowing these figures to operate freely in America is slowly turning our country from a bastion of freedom to an oppressed Muslim entity. Not today or tomorrow but someday it will happen. If Americans want to know what their country will be like even fifteen or twenty years from now, Europe is a good example. Melanie Phillips, the author of “Londonistan,” insists that we are not paying attention to what is happening in the Muslim world. She says we ought to be listening to them and understanding what their intentions are. Little by little Muslim efforts work tirelessly to change one aspect at a time.

The film’s message, look for it, recognize it, speak out against it before it is too late.

Americans and other westerners are vastly naïve about the enemy we face. If we stop maybe they will stop. No, they won’t stop, they will never stop. They, the enemy must be defeated thoroughly on all fronts devastatingly, and completely. That is the only thing that will defeat them. It requires a determination that is much bigger than the enemy can ever muster. The Third Jihad shows that if we are going to be victorious we are going to have to work much harder than we are now.

The choice is ours ultimately. How much do you value liberty? If it is anything to the right of Sharia law then Americans are going to have to get moving, because right now the enemy is winning. If we continue on our present course, our grandchildren will be praying to Allah five times a day and will consider the drawing of cartoons as a crime punishable by death.

Let’s not let that happen.