Jews speak up for Christians 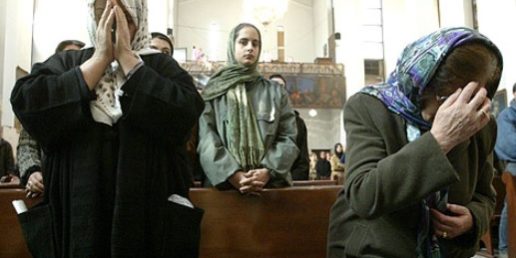 A relatively new phenomenon has emerged on the Middle East scene in the form of Jews standing up for persecuted Christians.

It’s a true wonder, bearing in mind the shocking history of Jewish persecution at the hands of the ‘church’ over the centuries. But it is also no doubt a warm response to the growing worldwide support for Israel among Christian people, especially in Africa.

And so, keen to build on this developing friendship, the Israeli government has just hosted an unprecedented media summit in Jerusalem for Christian journalists from around the world.

Prime Minister Benjamin Netanyahu used the occasion to speak up for embattled Christians in Iran and neighbouring Syria. “Christians today have been lashed for sipping wine during prayer services,” he said, “brutally tortured for doing nothing more than practicing their faith. Some world leaders are willing to ignore this oppression and seek to appease Iran, but I am not one of them.”

Yes, even much of the Western church is silent on the issue, apparently indifferent to their suffering.

Canon Andrew White, known as the ‘Vicar of Baghdad’ and also speaking in Jerusalem, asked why, adding: “Here we see Jews standing with us, but where is the Church?”

White saw much of his large congregation murdered in the crisis that followed the invasion of Iraq, and thousands of Christians have been forced to flee in the face of the Islamic State advance.

Does this weak response to the plight of persecuted Christians reflect the flabbiness of our faith? Do we simply fail to comprehend what it must be like because we are so comfortable and thus unable to identify with what suffering for Christ means? For the most part, we are not even willing to stand up for what we believe – for the gospel and the truth of the Bible – in case we should be arrested for ‘hate speech’ or ‘homophobia’.

While some indeed have spoken out, and paid dearly for it, the rest of us have been intimidated into silence as we retreat into our holy huddles. But if we can’t stand the low heat now, how will we fare when the temperature is turned up and we are called to endure the kind of persecution Jesus predicted for his followers?

“Be on your guard,” he warned. “You will be handed over to the local councils and flogged in the synagogues…You will be hated by everyone because of me, but the one who stands firm to the end will be saved.” (Matthew 10. 17, 22) Many Christians remained silent while Jews were hauled off to the gas chambers and, although now somewhat more secure in their own state, they are still in grave danger, and we mustn’t fail them this time. And yet they are prepared to help us!

It’s time to forsake cowardice and take on the sort of courage which Christians in some parts of the world are having to exhibit in bucketloads. Take the believers in Iran, for example, to which Mr Netanyahu drew the media’s attention. Despite the danger of following Jesus there, 20 Iranian Christians recently nailed their colours to the mast in a mass baptism. “I’ve been waiting for this moment for nearly nine years,” said one convert. “This was my wish before I die,” said another. Christianity is growing there by leaps and bounds amid reports of Muslims encountering Jesus through dreams and visions. “We have been praying for years that Iranian people believe in Yeshua (Hebrew for Jesus) and get baptized. Now this dream is coming true,” said a convert whose brother was murdered for his faith in 1994.

Another highly dangerous place to be a Christian is North Korea, where believers are actually meeting in holes in the ground, just as the faith heroes of old had done according to Hebrews 11.38.

A missionary friend of mine sometimes travels to a part of Africa that is equally dangerous, infested as it is by the Al Shabaab terror organization. As a result, some Christians are forced to sleep in the forest! But my friend was determined to bring comfort to them with his inspiring teaching skills, so he made his way there despite Foreign Office warnings to avoid the region, and the fact he could not even be covered by travel insurance for that part of his journey. On top of that, he nearly died from an infection he picked up on his last visit to the area!

That takes courage, but he said it was worth it just to see the sheer joy on the faces of his brothers so happy and encouraged by his visit.

I conclude with the heartwarming story of Israeli tennis player Dudi Sela who, due to the courage of his religious convictions, turned down the chance of reaching the semi-finals of an ATP (Association of Tennis Professionals) Tour event. Just eight minutes into the deciding set, he realised it was almost sunset, which marked the beginning of Yom Kippur, the Day of Atonement (the holiest day of the year for Jews). So the 32-year-old informed the umpire of his decision to retire and left the court.

The match was originally scheduled for Yom Kippur itself (i.e. the following day), but was changed to start before the fast following pressure from Israeli tennis officials. Unfortunately for Dudi (ranked 77 in the world), his quarter-final clash went to three sets and couldn’t be finished in time.

The Day of Atonement, when Jews seek forgiveness for sins committed over the past year, is ultimately fulfilled by the coming of Yeshua, their Messiah, who atoned for our sins through his death on the cross as the perfect Lamb of God. (Isaiah 53.6; 1 John 2.2)

For more information on the plight of persecuted Christians and how you can help, see www.barnabasfund.org