It’s not about metal detectors 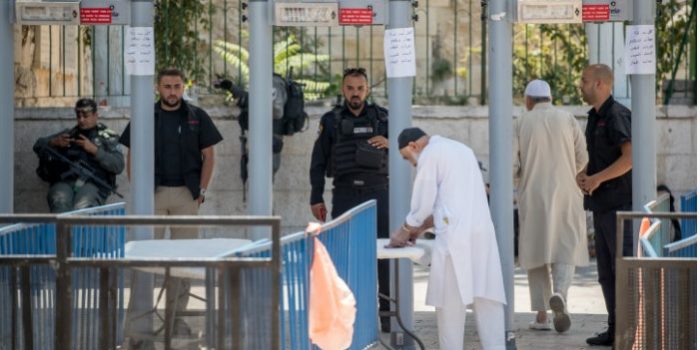 The present Palestinian riots over the placing of metal detectors at the eight gates leading to the Temple Mount following last week’s killing of two Israeli policemen by three Arab Israelis is not about status quo, nor is it about the restriction of Muslim worshipers.

Those who try to convince us that this security measure hurts the feelings of Muslims don’t know what they are talking about. Even worse, they are playing right into the hands of Muslim radicals who hope to turn the conflict into a full-blown religious war.

One can argue about the wisdom of such a move, but Israel made the decision to install the metal detectors solely for the safety of visitors to the holy site. Prime Minister Benjamin Netanyahu’s quick acquiescence to earlier Muslim demands that he remove the metal detectors was seen as fear of Palestinian rage and a further compromising of Israel’s sovereignty. Having seemingly heard the voice of his disgruntled constituency, Netanyahu is now taking a harder line, and putting the present troubles in the context of a larger, ongoing war against Israel.

Nevertheless, it is surprising how slowly both the Israeli and Palestinian leaderships appeared to grasp what the masses understood immediately–that the riots aren’t really about metal detectors. They’re about what the entire conflict is about–Jewish sovereignty over “occupied” Muslim territory.
Mahmoud al-Habash, religious advisor to Palestinian leader Mahmoud Abbas, stated clearly that the “primary reason for the is the occupation, the cancer that corrodes stability, security and peace.” Likewise, Palestinian diplomat Abu Alaa (Ahmed Qurei) said that what Israel is now doing looks like “reoccupation of Jerusalem,” itself an interesting comment about who really controls the Temple Mount.

From the Israeli side, influential columnist Kalman Liebskind echoed the opinion of many when writing that “only a fool would believe that the issue is metal detectors … it is about sovereignty.” Palestinians are unwilling to go through these devices because, he continues, “such checks proclaim that these are our security measures, this is our Mount. And it is for this reason why our government must not blink. For a blink would be another proof that we are not really sure whether this place is ours.”

A similar view was expressed by the daily Israel Hayom columnist Dror Eydar, who wrote that “a sovereign presence requires determination. Not a hesitant, indecisive presence that wishes to appease our enemies, but rather a clear and natural presence of a nation at its holiest site.”

Now torn between fear of Muslim rage and necessity to protect Jewish life at all costs, Netanyahu is still weighing his options, including the complete removal of those metal detectors. Being dragged unwillingly into the sovereignty issue, Netanyahu is caught between a rock and a hard place, which means he is bound to disappoint his voters, and that very well may cost him the next election.