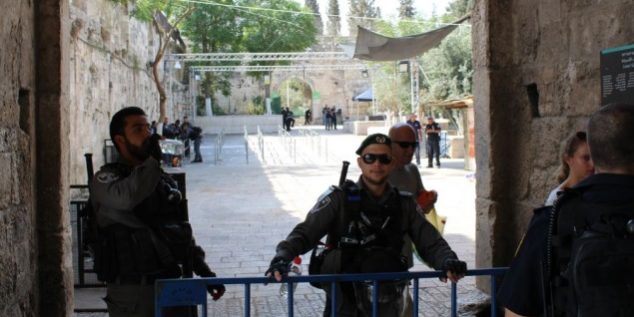 The majority of Israelis think the removal of the metal detectors at the entrance to the Temple Mount constitutes a capitulation by the Israeli government, according to a Channel 2 News poll published on Tuesday.

Seventy-seven percent of participants responded “yes” to the question whether the removal of metal detectors constituted capitulation, while 17 percent said “no” and six percent said they didn’t know.

When asked whether it was the right decision to place the metal detectors at the entrances to the Temple Mount in the first place, 68 percent said “yes,” while 23 percent said “no” and nine percent said they didn’t know.

But despite the removal of the metal detectors, the Palestinians said the chosen alternative—smart cameras able to detect hidden weapons or explosives—was still unacceptable, amid allegations Israel was trying to expand control over the site under the guise of security—a claim Israel denies.

The Waqf, the religious body that runs the Islamic sites in the Al-Aqsa compound, said worshipprs would continue to stay away from the plaza and pray in the streets outside.

A Waqf spokesman said it was awaiting a decision of a technical committee but was demanding the situation revert to the way it was before the metal detectors were installed.

Thousands of Muslim worshipers gathered outside the Lions’ Gate in Jerusalem’s Old City for evening prayer on Tuesday, maintaining their refusal to enter the Temple Mount complex.

After the prayer, some of them threw stones and other objects at police forces, who dispersed the rioters using riot control measures.

In addition, public and religious figures called on the Arab public to arrive on Friday to the Temple Mount area to participate in the demonstrations.

Palestinian President Mahmoud Abbas said the Palestinian Authority will not renew its ties with Israel until all security measures are removed.

The Palestinians claim the police did not remove all security cameras at the entrance to the Temple Mount, left barricades instead of the metal detectors, did not open all gates to the Temple Mount and plans to install smart cameras in the near future.

Speaking at a meeting of the Palestinian leadership in Ramallah, Abbas said there will be no change in relations with Israel until the situation returns to what it was before the July 14 terror attack at the holy site, when three Israeli Arab terrorists smuggled weapons into the Temple Mount complex and opened fire at an Israeli police patrol, killing two officers.

“All the Israeli measures on the ground from that date to the present day are supposed to cease to exist and then things will return to normal in Jerusalem, after which we will complete our work regarding bilateral relations between us and them,” Abbas said.

On Friday, Abbas announced he was freezing all ties with Israel, including security cooperation.

“Relations with Israel will be frozen at all levels until Israel commits itself to canceling all its steps against the Palestinian people as a whole and against the city of Jerusalem and the Al-Aqsa Mosque in particular, and to committing itself to preserving the historical and legal situation in Al-Aqsa,” he said in a statement.

“We reject to the metal detectors, as they are political moves presented in the guise of security measures, whose sole goal is to take over the Al-Aqsa Mosque and escape the peace process, turn the conflict from a political one to a religious one and break up the mosque based on time and place,” the Palestinian leader added.

The installation of the metal detectors set off widespread protests and deadly Israeli-Palestinian violence in the past week. Large crowds of Muslims prayed outside the shrine in protest every day, refusing to pass through the metal detectors.

The spike in tensions and the deaths of three Israelis and four Palestinians in violence on Friday and Saturday raised international alarm and prompted a session of the United Nations Security Council to consider ways of defusing the crisis.

“All parties should work to reduce these tensions and we offer whatever assistance we can in helping to do this,” Nikki Haley, US ambassador to the United Nations, told the Security Council in New York. “At the holy sites, it’s vital that both access and security be ensured.” Washington has already held talks with Israel and Jordan to help resolve the crisis.

The continued protests meant that the escalating crisis between Israel and the Muslim world, which began in mid-July, was not defused, even after Israel backed down on the metal detectors.

Jordan, the Muslim custodian of the shrine, has played a key role in trying to end the showdown over the holy site.

Jordanian Foreign Minister Ayman Safadi said the kingdom wants “calm to return” to the shrine and to see a historic status quo there restored. Israel must “revoke all new measures on the ground,” he said.

Israel’s security Cabinet announced the decision to remove the metal detectors early Tuesday. It said police would increase the deployment of forces until the new measures are in place.

The statement said the government would budget 100 million shekels ($28 million) to implement the security plan over a period of “up to six months.”

Israel’s proposal set off rumors among Palestinians that the “smart cameras” Israel plans to install could see through clothing and could prove particularly embarrassing to women.

Israeli police addressed the rumors Tuesday, saying in a statement that it does not use any type of camera that harms anyone’s privacy “and has no intention of using such cameras in the future.”

The cameras are to protect public safety, the statement said.