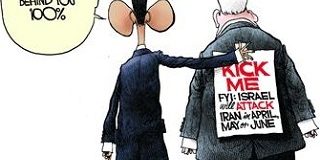 From the moment Obama was elected as U.S. President in 2008, he has made it evident to those with eyes to see and ears to hear that he is a Muslim Brotherhood apologist, an extreme left wing ideologue, a despiser of the United States Constitution and of American exceptionalism and, in particular, a man with a pathological animus towards the only democracy and true ally of America in the Middle East: Israel.

Israel’s prime minister, Binyamin Netanyahu, was Obama’s target from the get go. Bibi’s government came under intense pressure from the Obama administration to take suicidal measures in order to induce the Palestinian Authority to enter negotiations.

Israel had made frequent and breathtakingly risky offers to the Palestinian Authority over many years in the hope of a peace agreement, even though it endangered the very survival of the Jewish state.

However, the Palestinian Arabs rebuffed each and every concession given to them for they have no interest in peace but wish only to destroy Israel. It certainly makes no sense to continue giving further one sided concessions to such an Islamo-Nazi entity.

Netanyahu was given a stark choice by an ever emboldened and ruthless Obama. Either release over 100 convicted Palestinian murderers of Israeli civilians or freeze construction of apartments for young Israeli families in land demanded by the PA.

Netanyahu was forced to free terrorists with blood on their hands to the anguish and despair of the victims’ families and loved ones. Obama nevertheless still forced Bibi to then freeze the building of desperately needed homes.

To his credit, Netanyahu, has done his utmost to ensure Israel’s security. How different from our own president who is systematically slashing our military to unprecedented levels not seen in decades and aiding our enemies while dissing our allies. All this while under Obama’s watch people are being slaughtered, raped and terrorized in the Middle East: Christians, Jews, Yazidis, Kurds and Muslims.

Netanyahu had planned to bomb the Iranian nuclear weapons facilities in 2012 in order to provide both Israel, the United States and the free world with vital security against thermo nuclear Armageddon.

However, he was allegedly prevented from doing so by Obama who leaked sensitive information to the disgusting and pathetic liberal media thus alerting the Islamo-Nazi Iranian ayatollahs and mullahs.

House Speaker, Boehner, invited the Israeli prime minister to address a joint session of Congress to warn of the Iranian existential threat to Israel and the world. Obama was beside himself because he knew that Netanyahu might well expose his manic dash towards a terrible deal with the Iranian regime.

This is the same Islamic regime which provides aid and comfort to terrorists worldwide and has killed and maimed so many American servicemen and women in Iraq and Afghanistan – going back to the killings of hundreds of U.S. marines in their barracks in Lebanon.

Obama has done his utmost to discredit Netanyahu. He mobilized the Democrat base in Congress – including all of the Congressional Black Caucus – to boycott the speech and some fifty Obama sycophants did so. Nor did he permit any of the senior members of his administration to attend.

Nevertheless the speech went ahead and was a spectacular success, providing a far greater outpouring of warm support than Obama ever received during his State of the Union addresses.

It cast a giant shadow over Obama’s and Kerry’s appeasement of Iran and its lust for the Bomb. As a result, Congress is now preparing legislation that will require any deal with Iran to be treated as a treaty requiring the Senate’s approval.

Finally, in a near unprecedented move, Sen. Tom Cotton mobilized 47 Senators to sign a letter to Iran which said:

“The next president could revoke such an executive agreement with the stroke of a pen and future Congresses could modify the terms of the agreement at any time.” The leftwing media, always protecting Obama from criticism, went ballistic.

Thanks to Obama, the world is now in a much more perilous state. In fact, John Bolton, former U.S. ambassador to the U.N., reported that last February, with a stoke of his pen, President Obama took Iran and its terror proxy, Hezbollah, off the U.S. terror threat list.

The omission of Iran and Hezbollah from the report was likely yet another abject concession by the Obama administration in the nuclear weapons negotiations, Bolton said.

Obama cannot abide anyone opposing him. He was determined to remove Netanyahu from power and install a leftwing Israeli politician in his place who would be Obama’s poodle and do his bidding; thus imperiling Israel’s very survival.

Obama sent his election team, headed by Jeremy Bird (a student of Alinsky’s Rules for Radicals) to perpetrate a veritable coup against the sitting prime minister and unseat him. There are estimates that the State Department funded this operation to the tune of millions of American tax payer dollars.

The EU, which is hostile to Israel and funds illegal Palestinian settlement activity, also funded the anti-Netanyahu campaign as did – it is rumored – the malevolent Soros organization.

The US Senate has now launched a bipartisan probe into the White House’s alleged funding of the secretive NGO directly involved in working to remove Israel’s prime minister.

To Obama’s fury, his planned coup backfired horribly. The Israel electorate was outraged by such nefarious foreign goings on and rallied to Netanyahu’s and their embattled nation’s defense.

The leftist media in Israel attacked Bibi viciously (just like the ferocious American leftwing media’s libelous and bigoted assault on Israel) and the people responded by turning their backs on the media’s ad hominem attacks on Prime Minister Netanyahu. The Left, wherever it may be, is as sick as it gets.

Conservative values won the day and the Left was trounced.

Finally the Israeli public is so tired of witnessing Israeli leaders constantly making concessions to the Arabs, who call themselves Palestinians, only to be rebuffed time and time again with no counter concessions but instead forced to endure horrific terrorism.

They were relieved when Netanyahu finally said no to a Palestinian terror state; no to dividing Jerusalem; and no to releasing more Muslim terrorists.

This was a dazzling victory for Netanyahu; the Churchill of our time.

And for Obama, instead of popping the champagne corks and celebrating a malevolent victory, he is now eating crow along with all the Islamo-Nazi and Marxist enemies of America, Israel and Judeo-Christian civilization.