US punched Bibi, Barak in the face 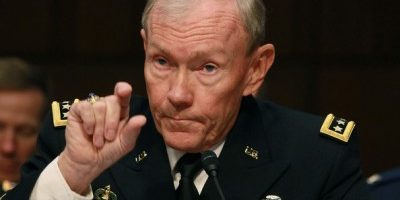 Once every few years Israel needs a slap in the face to remember where it stands in the world. On Tuesday it was US Chairman of the Joint Chiefs of Staff General Martin Dempsey who assumed the role of the responsible adult and slapped Prime Minister Benjamin Netanyahu and Defense Minister Ehud Barak, the duo orchestrating the national hysteria surrounding the possibility of an attack in Iran.

Israel can “delay but not destroy Iran’s nuclear capabilities,” he said while sitting next to Defense Secretary Leon Panetta, who visited Israel a few weeks ago to allay the concerns of the leadership in

Dempsey’s comments should be taken seriously, as should the stern message conveyed by Panetta, the White House and the American security establishment: If we can’t reason with you, the Israelis, we will have to get tough.

The general’s remark was not a slip-of-the-tongue. It was a calculated statement from a general of Irish descent and character. His words constituted a slap in Israel’s face, a punch in the face, and a kick to the most sensitive part of the body. To be more precise, the US slammed Israel’s head against the wall and said: “Shut up. Stop babbling about Iran. Without us there is not much you can do, and don’t assume for a second that we are dancing to your tune. You shouldn’t do anything stupid, and stop driving the entire world crazy.”

This was the message behind Dempsey’s comment. You don’t believe it? Just imagine what would have happened had an American general, after decades of ambiguity, would have held a press conference and announced that Israel does not have nuclear weapons, or that it does.

Now think again about the meaning of Dempsey’s statement, which was made after months and even years in which Israel was building up its image as an omnipotent power in the Middle East. Dempsey’s comments can even be considered earth-shattering: The US, Israel’s closest ally and confidante, has decided to bring the Jewish state’s leadership to its knees and hurt our exaggerated self-confidence and undermine our deterrence. No less.

Dempsey was painfully clear. He basically said that Israel should not disregard the opinions of its top security officials, stop the constant chatter on Iran and refrain from any acts that may have an adverse effect on the global economy. The general also meant to tell Israel that it mustn’t believe that Netanyahu has any control over the US because he has friends in the Republican Party. Dempsey laid down the facts: Israel is not America, it does not possess the same capabilities, and if Netanyahu and Barak continue wreaking havoc – Israel won’t have America either.

It will take a while before we will be able to gauge the depth of the current crisis between Israel and the US (and between Netanyahu and Obama). Washington made a strategic decision to show Israel who is the mentor and who is the protégé. The US hit Israel’s most sensitive nerve: The pride in its military power. But it appears that the US had no other choice. After weeks of belligerent headlines, President Obama had enough of Netanyahu’s inclination to play with fire. We should start getting used to it.