Terrorists motivated by ideology, not suffering 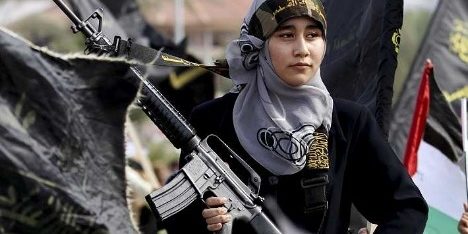 Contrary to popular belief, Palestinian Authority terrorists are motivated by religious and national ideology, not personal suffering, a PA researcher has found. The researcher, Bassam Yousef Banat, found that most terrorist killers were educated.

Banat focused on PA terrorists who carried out suicide bombings. He found that most were educated youths from middle-class backgrounds with no significant physical or psychological ailments. While most had jobs, they were not the primary providers for their families.

The majority were religious Muslims with strongly nationalist views, many of them descendents of Arabs who fled Israel during the War of Independence who believed in the “right of return” – the PA demand that they be allowed to “return” to live in Israel.

The study supports findings by Israeli and American researchers. Israeli researchers found several years ago that many PA suicide bombers were from the educated middle class and that nearly all terrorist leaders had at least one academic degree. A study on Al-Qaeda conducted by the United States Military Academy found that most Al-Qaeda members had a college education.

PA suicide terrorists were more likely to be from Shechem (Nablus) than from any other city. The terrorist group that sent the most suicide bombers was Hamas, followed by Islamic Jihad and Fatah.

Banat reported that most suicide bombers did not tell their families that they were planning an attack. Secrecy made their attacks more likely to succeed, he said.

He rejected the widely-held view of suicide bombers as motivated by personal pain, describing it as an insult to terrorists. “As for talking about psychological, social and economic factors and other motives for martyrdom, it is wrong to associate Palestinian martyrs with these factors since this underestimated the real value of a martyr and makes him/her some kind of social suicide,” said Banat, a teacher at the Al-Quds University in Jerusalem.

Prime Minister Binyamin Netanyahu has advocated a stronger PA economy as well, calling to bolster the PA economy as the first step in the diplomatic process.