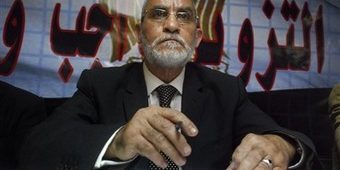 Egypt’s Opposition party, the Muslim Brotherhood, is threatening to end ties with Israel if it emerges victorious from an upcoming vote for parliament.

“We are totally unhappy with the illicit marriage between Cairo and Tel Aviv,” said Mohammed Badie, the leader of the group which spawned Hamas.

The London-based Al-Quds Al-Arabi reported Saturday that Badie threatened to “cause a stir in many values that have caused Egypt to hit rock bottom in recent years, during which the leading party has reigned”.

“Leaders of the regime know that if we rise to power we will change many aspects of its policy, first and foremost relations with Israel, which have contributed significantly to the maladies that have ailed us,” Badie said.

“We will not allow the Palestinians to die of hunger and close the door on them while opening it to Israelis who can enter Sinai whenever they so choose.”

The speaker of the Egyptian People’s Assembly, Fathi Sarour, said Friday that pressure imposed by the US on Egypt to reform its election process may spawn a religious takeover in politics.

“Any American pressure could bring on a change in the government that separates between religion and state and turn it into a religious regime,” he told AFP, adding that there was a chance the Muslim Brotherhood could ascend to power.

Many experts disagree, however, as the Opposition party currently holds a fifth of parliament seats and is not expected to gain any ground.