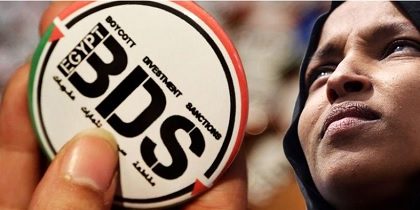 By Yakir Benzion, United With Israel—

In July, United with Israel asked its readers to contact California school officials and demand they stop the hate-filled messages in the curriculum from being foisted on impressionable young minds.

The campaign, in addition to pressure exerted by a wide variety of Jewish and pro-Israel organizations and individuals, succeeded.

“I appreciate the amendments the author accepted to ensure that any ethnic studies coursework is free of bias and discrimination,” Newsom said, but noted that the initial proposal was “insufficiently balanced and inclusive” and that the latest draft “still needs revision.”

The controversy stemmed from part of the curriculum labeled “Arab American Studies Course Outline,” which promoted the BDS anti-Israel boycott and focused on key American figures known for their anti-Semitic comments, including Palestinian-American activist Linda Sarsour, Reps. Ilhan Omar (D-Minn.) and Rashida Tlaib (D-Mich.), and the late UPI White House correspondent Helen Thomas, who resigned in shame in 2010 after saying Jews must “get the hell out of Palestine” and “go home” to Germany or Poland.

Although a revised version of the curriculum was released in July that noted anti-Semitism as a form of bigotry and removed mention of BDS, Newsom nixed the curriculum and sent it back to be improved before it has to be finally adopted by March 31, 2021.

Jewish members of California’s legislature and those opposed to the blatant bias in the proposal demanded changes so that the course in ethnic studies would “be appropriate for use with pupils of all races, religions, genders, sexual orientations, and diverse ethnic and cultural backgrounds, pupils with disabilities, and English learners.” They also demanded that it “not reflect or promote … any bias, bigotry or discrimination against any person or group of persons” and “not teach or promote religious doctrine.”

“The veto enables the Department of Education to reconsider its ill-conceived plan to produce a divisive program of ethnic studies,” the American Jewish Committee said in a statement. “AJC urges the Superintendent of Education continue efforts to improve the Ethnic Studies Model curriculum before its final adoption.”