I have reported in the past that Canada, who has a long history and reputation of being friendly, free loving, accepting, and welcoming as shown some colors that are not consistent with this assumption. And, I have many Canadians friends who are the epitome of what I just described. I am praying that they will have some influence on their own communities to expose and pressure purveyors of hate to change and abandon their ways.

Daniel Greenfield, a Shillman Journalism Fellow at the Freedom Center, is an investigative journalist and writer focusing on the radical Left and Islamic terrorism. Front Page Magazine published his article titled “BDS and Antifa Bigots Shout ‘Back to the Ovens’ at Toronto University” earlier this month.

The University was hosting a group of IDF reservists in August. The volunteers with Reservists on Duty include two women and five men:  six Jews and one Arab Christian. They were there to conduct a dialogue and answer questions about their experiences in Israel’s battle against terrorism.

Their event was met with unbridled hostility and unrecognizable conduct for a college campus committed to education and problem solving.

Shar Leyb, one reservist present, had grown up in Canada before making the decision to move to Israel and serve in the Israel Defense Forces. The ugly scenes that met him at York University was “a Canada he did not recognize.”

While angry mobs chanted, “From Toronto to Gaza, Globalize the Intifada!” in the hall outside, inside the room anti-Israel thugs tried to shout down the speakers. Students were pushed and shoved by BDS bigots waving PLO flags and chanting terrorist slogans determined to shut down the event and prevent the Israeli veterans from being heard.

At the center of the ugliness was the infamous Students Against Israeli Apartheid. SAIA had already been suspended once for their tactics. Unchanged as they were, SAIA’s account retweeted a Quds News Network story crediting the hate group for having “bravely protested and managed to disrupt an event.”

Nazih Khatatba was also present and is known for praising the murder of four rabbis in a synagogue as “courageous.”

But pro-Israel activists believe that a sizable presence by antifa had made the situation truly explosive. The two sets of radical activists appeared to function as one movement in organizing the attacks and then developing a single narrative blaming Jewish students and activists for the violence at the event.

The result was, “This was the first time we saw a very effective collaboration between antifa and BDS pro-Islamist activists,” Amit Deri told Front Page Magazine. “This event was proof that there is a deep connection between BDS and those who hate western civilization.”

The events at York University were so serious that Ontario’s Premier Ford and Prime Minister Justin Trudeau issued statements in response:

I am disappointed that York University allowed for a hate-filled protest to take place last night at Vari Hall. I stand with the Jewish students and the Jewish community.

On Wednesday night, violence & racist chants broke out against an event organized by the Jewish community at York University. What happened that night was shocking and absolutely unacceptable. Anti-Semitism has no place in Canada. We will always denounce it & all forms of hatred.

In addition to a slight tongue lashing by officials, the only disciplinary action taken in response were four tickets issued for trespassing. Therefore, these groups got the go-ahead that if they just budget for ticket money, the cost of doing business is otherwise free and clear. Violent mobs targeting Jewish and pro-Israel events in the future are not at all deterred.

And there has been no specific, named condemnation of Students Against Israeli Apartheid.

Meanwhile York University’s student center has been displaying, since 2013, a mural glamorizing the practice of Muslims throwing rocks at Jews. Few Jewish students and community members were surprised that anti-Semitic violence occurred at York, a university where public art celebrates anti-Semitic violence.

“Palestinian Roots” at the university’s student center is a mural depicting a Palestinian man holding rocks and wearing a keffiyeh, which is decorated with both a Palestinian flag and an outline of Israel, the West Bank, and the Gaza Strip, all depicted as a single territory. 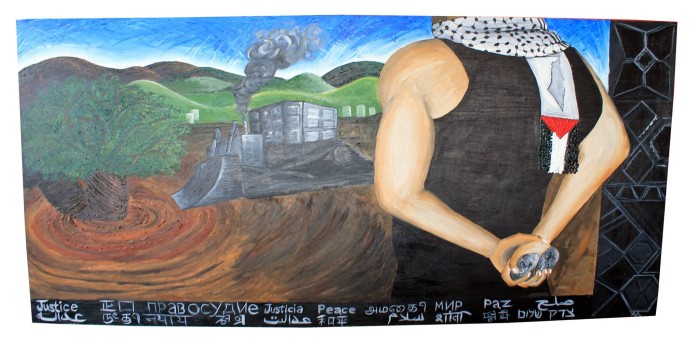 While the piece was only set to “be displayed for two years” after winning a student art competition in 2013, it remains on display as of this day, clearly making many Jewish students uncomfortable to say the least. It won an art contest. A mural celebrating violence against a people won an art contest at a Canadian University….

While members of Reservists on Duty were disappointed by the lack of dialogue with anti-Israel protesters, they believe that the ugliness on display unmasked the true hatred of the BDS movement.

In the midst of it all, the Reservists would not back down from their opportunity to speak—exercising their free speech was one determination they could not withdraw from—especially in the midst of such an attempt to silence them in a free democracy on a college campus with the noted goal of expanding dialog and relations.

Shavua tov. Have a great week.