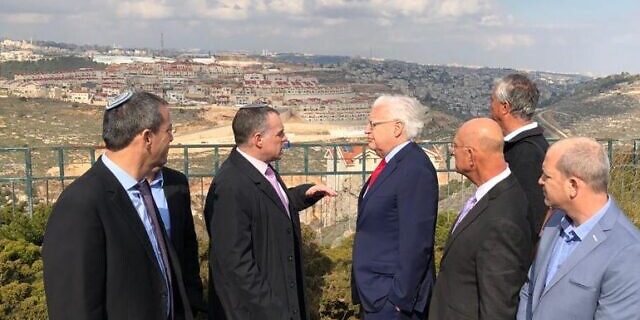 By Jacob Magid, Times of Israel—

Settler leaders have been meeting with right-wing lawmakers over the past week and presenting them with what they claim is a map of the Palestinian state envisioned by the Trump plan, which would encircle 15 Israeli communities in a manner they say is unacceptable.

The Yesha umbrella council of West Bank mayors passed a resolution earlier this month declaring that it would not accept the Trump plan’s green-lighting of Israeli annexation of parts of the West Bank if it meant agreeing to the other key part of the proposal — the establishment of a Palestinian state.

In the weeks since, Yesha officials, including chairman David Elhayani, director Yigal Dilmoni and various West Bank mayors, have been sitting down with lawmakers from the Likud, Jewish Home and Yamina parties in an effort to convince them to oppose the Trump plan, for which Prime Minister Benjamin Netanyahu has voiced his support.

To their meetings with right-wing lawmakers in the Knesset, the Yesha officials have been coming equipped with a blown-up map showing what they claim is the Palestinian state envisioned by the Trump plan in red. The map highlights the 15 settlements that would become isolated enclaves encircled by the Palestinian state and also shows that many of the key highways running into and through the West Bank, such as routes 5 and 60, would no longer be accessible to Israeli drivers.

Elhayani, however, admitted to The Times of Israel that the map is based on the conceptual version that was presented by US President Donald Trump at the plan’s unveiling in January. The administration has warned both sides against taking that map as final, noting that a joint US-Israeli mapping committee has been tasked with outlining the exact contours of the areas Israel would be allowed to annex and those set aside for a future Palestinian state.

Nonetheless, Elhayani said, the mapping committee members have refused to meet with settler leaders to take their concerns into account and thus, he claimed, the map the US said was only conceptual will end up being the final version implemented.

The mapping committee is made up of Knesset Speaker Yariv Levin (Likud), National Security Adviser Meir Ben Shabbat, Prime Minister’s Office director Ronen Peretz, and Ambassador to the US Ron Dermer on the Israeli side; and Ambassador to Israel David Friedman, his adviser Aryeh Lightstone and the National Security Council’s Israel and Palestinian affairs director Scott Leith from the US side.

Har Hebron Regional Council chairman Yochai Damri, who accompanied Elhayani during several of the Knesset meetings, said that when Yesha officials approached Israeli members of the mapping committee earlier this month, they were told that the mapping was still in its early stages, but that “there was no chance” the American side would take into account their alteration requests. Continue Reading….