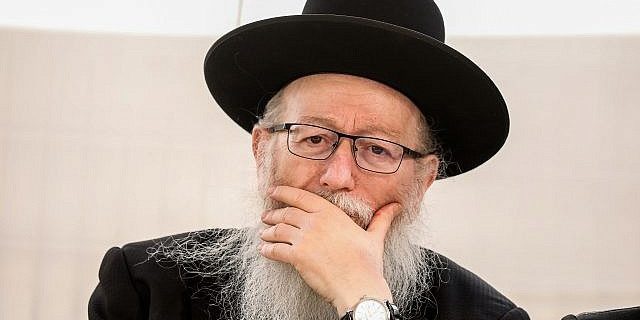 By Jacob Magid, Times of Israel-—

Health Minister Yaakov Litzman, who tested positive for the coronavirus late Wednesday, allegedly broke his own ministry’s guidelines on social distancing by attending group prayer services in the days before he was diagnosed, a TV report said Thursday.

Litzman’s positive test has forced almost all the Israeli politicians, officials, and health chiefs who are leading the country’s struggle against the pandemic, from Prime Minister Benjamin Netanyahu on down, to enter precautionary quarantine.

The same TV station quoted an unnamed senior minister accusing Litzman of having “put all of our lives in danger” by flouting the restrictions.

Litzman, 71, who on Thursday night was participating in a cabinet meeting on the virus threat via videoconference from his home, was said to be in good health. His wife has also been infected.

Witnesses told Channel 12 on Thursday that the health minister, who heads the ultra-Orthodox United Torah Judaism party, prayed at the home of a fellow member of his Gur Hasidic sect last Saturday — three days after government guidelines went into effect barring services from being held indoors. The witness said that while worshipers sought to practice social distancing, they were all together inside for over an hour and a half.

On Monday, after the guidelines had further intensified, barring any group prayer services from being held, whether inside or outdoors, Litzman was again allegedly spotted praying at a synagogue just outside of his home. Continue Reading….