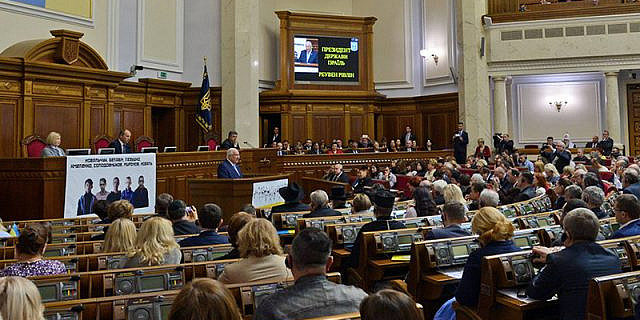 I do not like ceremonies. The officialdom in them obscures, in my understanding, the essence. I also doubt a sincerity in measured events which is always individual. Those who are sincere at ceremonies are sincere in general, many others are on duty. Among the speeches, there are so many formalities, and so rarely this kind of speeches is ‘the real thing’ – as it was with President of Israel Reuven Rivlin’s speech at the parliament of Ukraine in September 2016 when he told to hostile audience that our memory on their predecessors’ atrocities and those animals disguised as humans whom they decided to worship now as their heroes, did not vanish, not for a bit; or as it was with incredible Marian Turski during his outstanding speech at the United Nations in New York in January 2019. I wrote about my friend’s first-hand message to mankind then.

On the other hand, I understand the necessity to remember and to do it publicly and in an organised way. Compulsory commemoration? It is better this way than nothing. I would never know how sincere Willy Brandt was falling on his knees at the Warsaw Ghetto Memorial, but I think that the fact of him kneeling there is good for the balance between Good and Evil.

The balance which is if to speak and think on the Shoah is non-mendable. And that’s why it still bothers us, it bothers the hearts of people who are responding to the theme of Holocaust in its variety and nuances, its general and individual aspects alike.

The Holocaust case is not closed. It will never be closed.

And we return to it en masse , country by country, every January, and many of us, with Israel leading on this, every April, too.

There are some of us who are dealing with Shoah on a daily basis. Those people, among them many of my distinguished colleagues world-wide, are living lives in which Holocaust exists in present tense. And for many of us, it is highly personified, too.

When we are turning to figures, the devastating figures of Holocaust, would it be 96% of the large Jewish population of Lithuania exterminated in no time and enthusiastically, or 90% of Polish Jewry annihilated with similar enthusiasm, or one and half million children killed in a cold blood by monsters who are human in name only, I always am seeing a pictures. Of those people who had name, place, family, home, relatives, friends. Who were reading, working, laughing, thinking, trying, hoping. Continue Reading….