A Welcome Tool to Combat anti-Semitism Gets Mixed Reactions 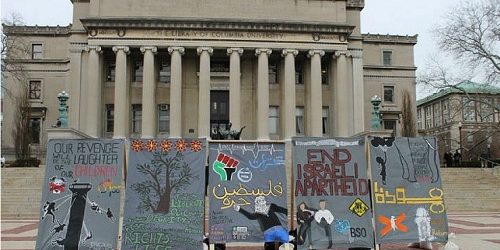 It’s no secret that Jewish kids on college campuses have been subjected to increasingly aggressive and intense intimidation, ranging from the placement of “eviction” notices on the doors of their dorm rooms to faculty members refusing to sign permission slips for students to study abroad in Israel.

In an effort to ostracize Jewish students, those who believe in the right of the Jewish people to a homeland are prevented from joining organizations whose progressive values they support. The hostility comes against the backdrop of heightened tension, a record wave of anti-Semitic attacks on Jews and Jewish institutions, and a well-financed and well-organized BDS campaign that demonizes Israel. Even when unsuccessful, BDS campaigns leave a lasting impression by framing Israel in a negative light.

For the most part, parents and the Jewish community have felt frustrated and exasperated. Often not knowing how to respond to the challenges, they have had limited tools in their arsenal to defend the rights of Jewish students and to resist the onslaughts they encounter.

In light of this, it was interesting to observe the response of so many Jews to the signing by US President Donald Trump of an executive order that extends the protections of the Civil Rights Act of 1964 against discrimination to include the kinds of verbal assaults and hostile actions that have rightfully been of concern to the Jewish community.

Considering that it had been endorsed by former-President Barack Obama – and initially introduced by members of both parties, and unanimously passed by the Senate in 2016 – one would think the order would be positively received by all quarters in the Jewish community.

Yet instead of evaluating the action protecting Jewish students on its merits, reactions were defined by preconceived political orientations. While there is justification for skepticism about the sincerity of this particular president when it comes to fighting bigotry and prejudice, we should recognize and appreciate that this action benefits us and our children by placing the full force of the federal government behind the effort to combat anti-Semitism on college campuses.

The most intriguing aspect of the reactions was to see how many relied on the initial, inaccurate reporting by The New York Times to form their opinion. Much of the panic was fed by the incorrect assertions that the order “effectively interpret(s) Judaism as a race or nationality” and defines Judaism as a matter of “national origin.” Based on that misrepresentation, many absurdly thought the order somehow questioned the status of Jews as citizens of the United States, while others concerned about free speech ignored the simple fact that the Constitution guarantees free speech and supersedes executive orders.

What can we learn from all this?

All too often our opinions and reactions are based on how The New York Times reports an issue.

While the New York daily may be the nation’s “paper of record,” when it comes to reporting on matters pertaining to the Jewish community and Israel, we should not rely on their reporting as Gospel and allow it to determine how we respond to matters affecting our community.