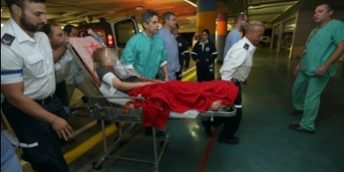 The Palestinian ruling Fatah faction, headed by Palestinian Authority President Mahmoud Abbas, is celebrating the 55th anniversary of its first terrorist attack against Israel by reminding everyone that it remains committed to the “armed struggle as the only way to liberate Palestine.”

Thousands of Fatah supporters took to the streets in the Gaza Strip on December 29, 2019 to celebrate the anniversary. The celebration was organized by the armed wing of Fatah, Al-Aqsa Martyrs Brigades – Nidal Al-Amoudi Battalion, a rogue Fatah splinter group. Hundreds of masked Fatah gunmen dressed in military uniforms marched through the streets of Gaza City. Some carried rocket-propelled grenades and other weapons.

The military parade could not have taken place without the consent of Hamas, the Palestinian Islamist movement that has been ruling the Gaza Strip since 2007, when its members overthrew the regime of the Fatah-dominated Palestinian Authority (PA). Since then, Hamas and Fatah have been at each other’s throats – a fight that has resulted in the emergence of two separate Palestinian entities in the West Bank and Gaza Strip.

Hamas, it appears, perceives Fatah as a major threat to its rule over the Gaza Strip, which is presumably why it arrests and harasses Fatah members there on a regular basis. Similarly, the PA security forces and Fatah seem to consider Hamas a real threat to their rule over parts of the West Bank; they, too, have long been cracking down on Hamas members and supporters there.

Why did Hamas allow Fatah’s Al-Aqsa Martyrs Brigades to hold a military parade in the Gaza Strip? The Fatah group operating in the Gaza Strip shares the ideology of Hamas, which defines itself as the “Palestinian branch of the Muslim Brotherhood.” Both Hamas and the PA seek to replace Israel with an Islamic state through violent jihad (holy war). The Hamas covenant, published in 1988, defines jihad as its highest priority for the liberation of Palestine and the establishment of an Islamic Palestine “from the Mediterranean Sea to the Jordan River.”

It is worth noting that the published statements made in the past few days by the Fatah group in the Gaza Strip are almost entirely consistent with the Hamas ideology. Continue Reading….