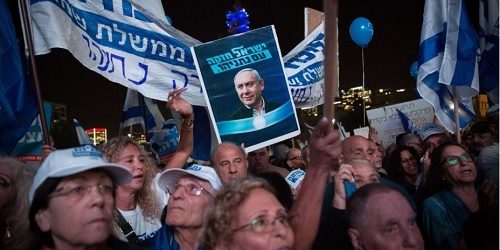 Prime Minister Benjamin Netanyahu failed in a frantic attempt on Sunday morning to quickly garner the 61 signatures of Knesset members needed to compel President Reuven Rivlin to give him a second chance (third, if you count this year’s earlier election in April) to form the next government.

Both Netanyahu and his rival, “Blue and White” party chief Benny Gantz, failed in their first attempts to form a government following September’s election.

The current situation is that if any Knesset member, not just party leaders, can gain the backing of at least 61 out of 120 fellow MKs, then Rivlin will give him or her a shot at becoming prime minister by cobbling together a majority coalition.

If no one manages to do so by the middle of December, the Knesset will by law dissolve itself, and Israel will face a third national election in less than a year.

Netanyahu thought he’d be able to get to Rivlin first after “kingmaker” Avigdor Liberman, head of the Yisrael Beiteinu party, said he and his faction would back both the prime minister and Gantz in this effort, anything just to avoid a third election.

But Netanyahu couldn’t get the necessary number of signatures by the 9am deadline on Sunday after a number of right-wing allies, and even members of his own Likud party, declined to sign. Continue Reading….