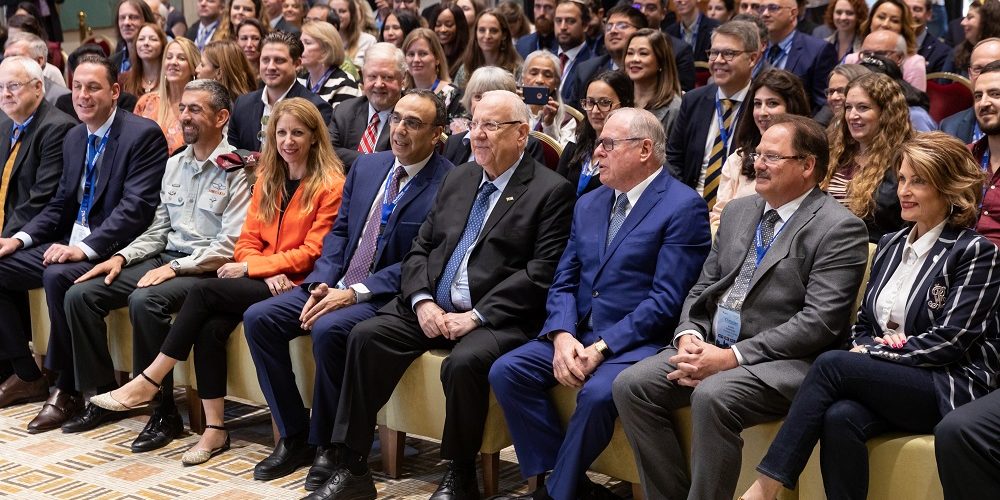 The “warmth factor” reflects an all-time high between Israel and the evangelical Christian community. Abundant evidence not only shows in 2018 Christian tourism- its highest at 2.5 million-but also in full display at the third Christian Media Summit. (CMS)

Sponsored by the Israeli Government Press Office (GPO) PM Bibi Netanyahu, President Reuven Rivlin, and US Ambassador David Friedman expressed-in person-their heartfelt appreciation for the 150 Christian media from 30 nations gathered in Jerusalem. The Prime Minister stated at the opening Gala at the Friends of Zion Museum, “We have no better friends in the world than Christian media. It’s no accident that Israel is the only place in the Middle East where Christians are free to practice their faith, complete religious freedom for all-especailly for Christians who are constantly attacked in the Middle East.” Before the Gala, PM Netanyahu placed a mezuzah at the entrance of the Friends of Zion Museum (FOZ)to celebrate the announcement of their new Ambassador Institute with its state-of-the-art tech platform.

Ambassador Friedman observed, “We have implacable enemies. We don’t take you for granted. And we cannot repay our debt of gratitude to President Trump.” When we met for lunch at his compound a few days later, President Rivlin remarked, “I know that each and every one of you is dedicated to using media to spread the truth…I believe that truth, together with mutual respect, is a core component of peace as well.”

Israel’s warm welcome was also reflected in hosting us as their guests not only in Jerusalem, but in other locations which supplied valuable information and experiences. I’ve traveled to Israel many times since 1990. I always learn and see more with each visit. The GPO’s itinerary and speakers at this, my second CMS, were again exceptional.

Nitzan Chen, Director General of the Israeli Government Press Office in the Prime Minister’s Office convened the first Christian Media Summit in 2017. It was a banner year of anniversaries; among them the 100th anniversary of the Balfour Declaration and the 50-year reunification of Jerusalem in 1967. President Trump’s announcement to move the US Embassy to Israel’s capital electrified Israel in a modern, historic announcement. Mr. Chen had convened a number of Jewish media events but in honor of the major milestones of 2017, he decided to convene a Christian Media Summit. His brainchild was the first official event of its kind and proved to be a tremendous success. Now three years later, the trend continues. The Christian Media Summit serves as an opportunity to network and fill advocacy toolboxes with facts about Israel. Christian media then return and unpack their toolboxes of truth in their own nations whether in print, television, radio, or social media.

Recognizing the major importance of Chen’s idea, the State of Israel supported the venture with Prime Minister Netanyahu personally involved and updated in regular meetings with Mr. Chen and Senior Staff. Collaborative ideas are emerging. For instance, in the 2018 CMS, the Prime Minister was asked to appoint an official Emissary of the State of Israel to the Christian World. The PM reported this year that an Emissary is still a priority he wants to fulfill, yet security issues and two back-to-back elections must be addressed. In the meantime, Nitzan Chen has become the official point of contact in Israel for the Christian world around the globe. An observant Jew, Nitzan’s portfolio is stacked with an impressive journalistic and media background. He has won the hearts of the Christian media with his warmth saying, “Our greatest friends are Christians.” He treated us like long-absent family members with his demonstrated steadfast commitment and determination not to let go and remain together, forever united. 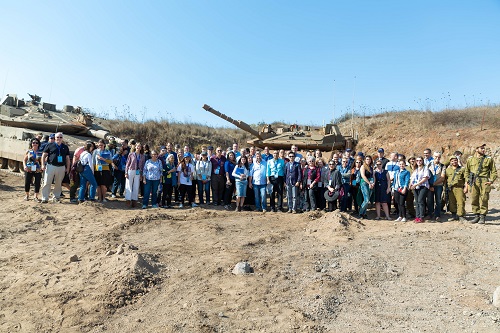 After the three faith leaders signed the parchment proclamations, Nitzan then invited all of us to sign the proclamation. Hadassah Schwartz, GPO Senior Staff, penned and recited a beautiful prayer for the proclamation, in part saying,” Bless the Golan Heights and all those who seek its peace…remove war and bloodshed from the world and bequeath a great and wondrous peace from heaven.”

Trump Heights, designated to honor President Trump after he announced Israel’s sovereignty over the Golan Heights, has now received its first inhabitants; a boarding school for troubled youth where they will be mentored and prepared for pre-mlitary service. Next summer around 20 families are scheduled to live in the newly created town.

Meeting with the young men and women of the IDF is always one of my favorite times in Israel. They remind me of our fine US military. Stationed just a few miles from menacing Iranian military bases in Syria, the IDF Merkava tank unit is literally on the front lines of freedom not only for Israel but for the USA since we are in Iran’s crosshairs too. We cautiously glanced over a high mound of dirt to see the sensor-laden, high tech fence separating Israel and Syria.

LTC Conricus, IDF International Spokesman, then articulated a sobering security briefing a while later at a meeting facility still within a stone’s throw of the border. Conricus stated, “Our threats are not existential at the moment, but a nuclear Iran would change that.”

Summing up “the spectacular” is next to impossible. So, I’ll close with a quote which I envision as a prayer for the worldwide pro-Israel Christian community. Each of us can and must BE media within in our own sphere of influence, big or small. Pass on the facts, intensify the truth about Israel and push back on the rising tide of antisemitism.

I pray what American patriot Thomas Paine wrote centuries ago that, “The mind once enlightened cannot again become dark.” In God’s mercy, may it be so.

Arlene Bridges Samuels is an author at THE BLOGS, Times of Israel and a contributing writer at The Christian Broadcast Network and The Jerusalem Connection. Since retiring from the American Israel Public Affairs Committee (AIPAC) as their SE Regional Christian Outreach Director, she is a consultant, networker, and speaker.