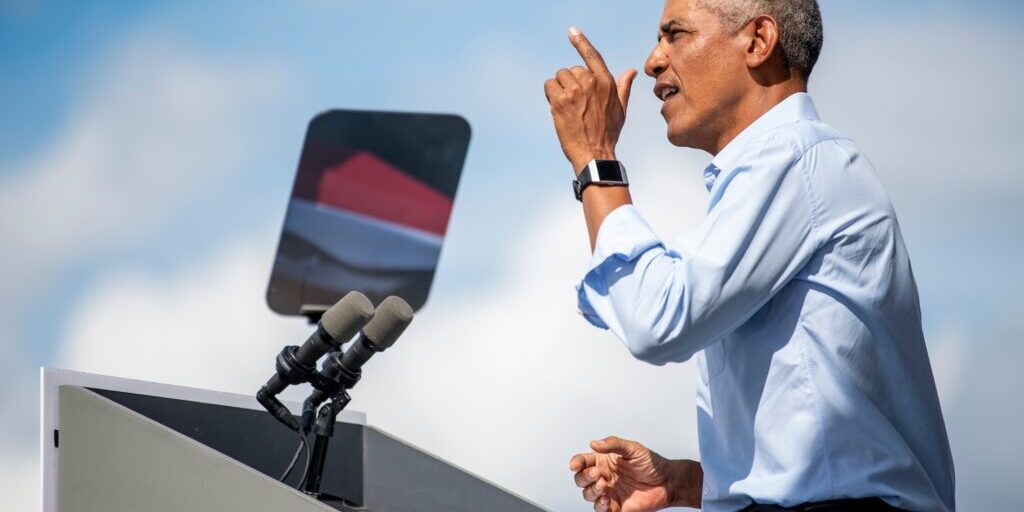 Former President Barack Obama has penned a 728-page memoir, A Promised Land, that was released on November 17 and has already amassed record-breaking sales in its first week: 1.7 million copies. Lauded for its eloquent use of language, the book nonetheless has engendered criticism regarding Israel—and I’d like to add my voice to the critics.

Delving into an extensive assortment of book reviews from Israeli and Arab writers, I am conveying my research matched with my own experiences and expertise as a professional in the pro-Israel movement. I’ve worked, studied, traveled, and written about the Middle East for 20 years. In this week’s column, I am focusing on the former president’s view on Palestinians and “settlements” and a troubling lack of context about Israel’s history and its need for defensive measures in order to survive. Also, including more context about the Palestinian leadership’s intransigence, corruption, and anti-Semitism over the decades would have provided a narrative more closely aligned to reality. Obama’s thin contexts leave behind a troubling trail of misinformation about Palestinian leadership, Gaza, and Israel, the Promised Land.

Columbia University’s liberal professor Edward Said (1935-1993) was a highly respected Palestinian intellectual who condemned Israel and viewed it as a predatory occupier “waging a war against Palestinian civilians.” When his friend Barack Obama got involved in politics, Rashid Khalidi, another prominent Palestinian professor at Columbia and University of Chicago, observed, “Because of Obama’s family ties to Kenya and Indonesia, he would be more understanding of the Palestinian experience than typical American politicians.” Khalidi considers Israel “a callous occupying power.”

The controversial pastor Jeremiah Wright rounds out Obama’s list of key influencers from his university days and into his early political career as a senator in the Illinois legislature. As recently as 2015, Reverend Jeremiah Wright described Israel as “an apartheid state” and declared that “Jesus was a Palestinian.” The Obamas attended his Chicago church for 20 years. Wright married the future First Couple and baptized their children.

In early 2007, when Obama started his campaign for the U.S. President, he had built important relationships in the Jewish community. When he gave a speech at a Chicago American Israel Public Affairs Committee (AIPAC) event, he commented, “Israel is our strongest ally in the region and its only established democracy. We must preserve our total commitment to our unique defense relationship with Israel by fully funding military assistance.” He later claimed, “Such advanced multi-billion-dollar systems would help Israel deter missile attacks from as far as Tehran and as close as Gaza.” Former President Obama made good on supporting Israel’s annual security aid and also approved major funding for Israel’s Iron Dome, a defensive superstar protecting Israeli civilians. He plans on writing his second memoir, and it will be useful to weigh his words in 2007 about Tehran in light of the later Iran deal which culminated in 2015. A Promised Land ends in 2011.

In 2008, AIPAC invited presidential candidate Obama to speak at its annual policy conference in Washington, D.C. His star was already shining from his speech at the 2005 Democratic National Convention. In presidential election years, it’s AIPAC’s policy to invite the two nominees, both Democrat and Republican, to speak. Thus, in 2008, John McCain also spoke at the event.

It’s noteworthy to define AIPAC. It’s not a political action committee. It is a bipartisan organization, historically Jewish, founded in 1953. Its sole purpose is to strengthen the bond of the U.S. and Israel in a mutually beneficial relationship. AIPAC’s members include Jewish, Christian, Black, and Hispanic pro-Israel activists. The organization educates Congress—both Democrats and Republicans—focusing on legislation that assures Israel’s security, a security that rebounds to help the U.S., among multiple benefits, with intelligence-sharing about the Middle East. AIPAC’s even-handed policies, devoid of personal attacks against members of Congress, have led to essential efforts for Israel’s annual security aid and other related legislation.

As Obama’s campaign grew, a Los Angeles Times headline read “Campaign ’08: Allies of Palestinians see a friend in Obama.” He had effectively masterminded both sides.

I am setting the record straight on just several of his incomplete renderings of history, since too many exist to include here. Obama has dealt a disservice to some key facts about Israel.

One of the best reviews I read was written by Israeli Rabbi Dov Lipman in his November 26 article published in the Jewish News Service. It’s called “Obama’s Revisionist ‘Promised

Land.’” When I worked for AIPAC, I recruited and staffed nine trips to Israel for Christian leaders sponsored by its affiliated foundation, American Israel Education Foundation. We enjoyed Rabbi Lipman’s excellent briefing at the Knesset in 2014. Lipman was elected to the Knesset and served from 2013–2015. We all felt a kinship with him on many shared conservative issues. He was also regularly active with the Knesset Christian Allies Caucus.

To begin with a few of Obama’s quotes in Lipman’s article, here is the 44th president’s brief description of Israel’s miraculous establishment as a modern state. “As Britain withdrew, the two sides quickly fell into war. And with Jewish militias claiming victory in 1948, the state of Israel was officially born.”

These two sentences describing the reestablishment of Israel after 2,000 years of dispersion are a slight to biblical history. Surprisingly, his 728-page book omitted one of the most magnificent stories of a nation. On May 14, 1948, Israelis rejoiced at the founding of the modern Jewish state. The next day five Arab armies attacked. Although they were poorly equipped, the Jewish citizens came together as one, knowing that their existence as a Jewish state depended on beating back the Arab threat and achieving complete victory. God enabled their unity, grit, and determination—yet they paid a high price. Six thousand Israelis died in that war, out of a population of little more than 800,000. Their resources were scant, but God increased the loaves and fishes of creative strategies and defensive weapons and they won against all odds.

Obama goes on to say that in 1948 “Israel would engage in a succession of conflicts with its Arab neighbors.” This bland, one-sided viewpoint omits the Arab-instigated wars designed to destroy the world’s only Jewish state. Looking at this 72 years later, we see that the list of wars is long.

The 1948–49 War of Independence. The 1991 Gulf War, where Iraq fired Scud missiles into Israel. (Israel did not retaliate.) The 1956 Sinai Campaign. The 1982 and 2006 Lebanon wars. The 1967 Six-Day War. The 1973 Yom Kippur War, where Egypt and Syria attacked Israel on its holiest day. Plus, in 1987 and 2000, Israel quelled two violent Palestinian intifadas (uprisings) and defended Israeli civilians against Gaza’s terrorist group Hamas in Operation Cast Lead, Pillar of Defense, and Operation Protective Edge.

In another historical error, Obama imagines, “The rise of the PLO was the result of the Six-Day War.” As a matter of fact, the Palestinian Liberation Organization was founded three years earlier—in 1964. Obama’s inaccuracy with dates bolsters anti-Semites and the uninformed to lay blame on Israel for recapturing its biblical heartland in its 1967 victory in the Six-Day War.

Obama was not a fan of the “settlements.” He demanded in 2009 that Prime Minister Netanyahu freeze the building of homes in the “settlements.” The Palestinian President, Mahmoud Abbas, had promised he would engage in direct negotiations if the building stopped. Eleven years later, Prime Minister Netanyahu is still waiting, but he wisely decided years ago to continue building those homes—realizing Abbas’s “promise” to negotiate was another bad-faith Palestinian ploy.

One of the most glaring omissions is Obama’s failure to mention Israel’s 2005 unilateral withdrawal of 8,000 men, women, and children from their homes, businesses, and synagogues in Gaza—a departure that was excruciatingly painful to those whose lives were completely uprooted. The Israeli government had hoped that the Palestinians would then build a “Singapore by the Sea.” (Many people still wrongly think that Jews live in Gaza.) Instead, the Palestinians immediately destroyed everything the Jewish community had left behind for them. And, rather than ushering in an era of peace, the evacuation from Gaza led to Hamas’s terrorist takeover in 2007—which for the last 13 years has resulted in unrelenting rocket assaults and riots against Israeli civilians in southern Israel. A mantra from most of the world—including former U.S. Democrat and Republican Presidents—has habitually placed the burden of making peace on Israel’s shoulders.

Journalist Amir Taheri, born in Iran, is now the neo-conservative European chairman of Gatestone Institute, an outstanding think tank. Taheri was a former executive editor-in-chief of Iran’s daily Kayhan from 1972 to 1979 and has written for publications including Asharq Al-Awsat, the prominent Arab international newspaper. In his review of Obama’s memoir, Taheri comments, “A Promised Land doesn’t make it clear to whom was America promised and ends with the killing of Osama bin Laden. The so-called ‘Arab Spring’ became a disaster. The ‘Grand Bargain’ with the mullahs of Tehran fizzled into a tragicomic number. The ‘red line’ set in Syria became pink and then disappeared altogether.”

Obama’s current 728-page musings end in 2011. Hopefully, his follow-up memoir will comport more closely with history matched with context. And given Obama’s vast influence in the U.S. and around the world, he should take extraordinary care to tamp down rising anti-Semitism by presenting both Israel’s history and her people in an accurate light.

Join CBN Israel in praying that the true history and story of Israel will prevail:

Arlene Bridges Samuels pioneered Christian outreach for the American Israel Public Affairs Committee (AIPAC). After she served nine years on AIPAC’s staff, International Christian Embassy Jerusalem USA engaged her as Outreach Director part-time for their project, American Christian Leaders for Israel. Arlene is now an author at The Blogs-Times of Israel and has frequently traveled to Israel. By invitation, she has attended Israel’s Government Press Office Christian Media Summit three times. She hosts her devotionals, The Eclectic Evangelical, on her website at ArleneBridgesSamuels.com.