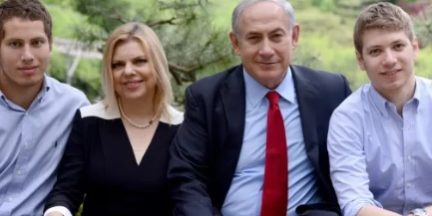 Yair, the son of Israeli Prime Minister Benjamin Netanyahu tweeted his outrage on Monday about a disturbing double-standard in the public discourse regarding relationships, noting the media storm surrounding his former Christian Zionist girlfriend as compared to the quiet acceptance of Jewish-Muslim matrimony.

“Why is it okay that the whole country made a big deal about me at the time when I dated a Norwegian Christian who loves Israel and is a Zionist (with the Israeli flag and her menorah at home in Norway), and it is not okay to say anything about Gideon Sa’ar’s daughter who is about to marry a Muslim Arab?”

Yair is referring to an episode in 2013 when he dated Sandra Leikanger. At the time, it was reported that Leikanger’s older sister lives in Israel and converted to Judaism. Leikanger’s family reportedly belongs to Norway’s Evangelical community. Yair has since ended his relationship with Leikanger.

Much ado was made in the media about religious Jews who expressed concern with the story being widely covered outside of Israel. Many media turned it into a partisan political issue. The Atlantic wrote that the relationship “would be a sweet story if it was not threatening the peace and stability of an entire nation,” stating that Yair’s choice in paramours upset the “right-wing.” The article noted that like other couples in Israel, Yair and Sandra could hop off to Cyprus and get married.

“So conservative ballyhooing, in addition to being upsetting and xenophobic and a grimy way to gain political traction against an opponent, is largely irrelevant,” The Atlantic wrote.

As Yair rightly pointed out in his tweet, the media was substantially less titillated when Alona, the daughter of Gideon Sa’ar, Netanyahu’s competitor for the leadership of Likud, announced her betrothal in May to the Arab Muslim actor, Amir Khoury. When the press inquired about the relationship, Sa’ar responded on Twitter, “Alona, ​​my beloved daughter, is a private person – get out of her private life!” And for the most part, his request was granted. Continue Reading…