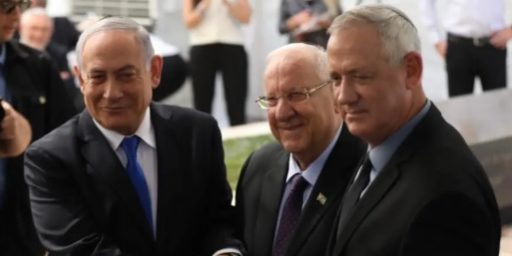 Prime Minister Benjamin Netanyahu and Blue and White Party leader Benny Gantz heard many compromise proposals on Tuesday but none of them brought Israel closer to preventing its third election in under a year, sources close to the two men said.

One proposal floated would have allowed Netanyahu to remain prime minister for another five to six months followed by Gantz for two years, and then the leader of Likud for the remaining year and a half. But Blue and White hardened its position after Netanyahu’s indictments and is now insisting on Gantz going first in a rotation in the Prime Minister’s Office.

“There are many self-proclaimed mediators but no meetings of the official negotiating teams and nothing direct,” said a source in Blue and White. “Do you really think Bibi will agree to retire after five months? It’s not serious. We don’t even know what proposals are real.”

The Blue and White source said chances of a third election are “90%,” because of the Likud’s unwillingness to compromise.
Hopes that Knesset Speaker Yuli Edelstein could lead a rebellion against Netanyahu were dashed on Tuesday, when the two men met and issued a positive joint statement together.

“We are calling for unity in Likud,” Netanyahu and Edelstein jointly said. “There is a need to lower the flames, avoid splitting and internal fighting, and stand together united against the challenges facing the party and the country.” This was the first statement Edelstein issued since Attorney-General Avichai Mandelblit announced Netanyahu’s indictment. Edelstein told reporters after the meeting that he is working in every way possible to promote a unity government. Continue Reading…