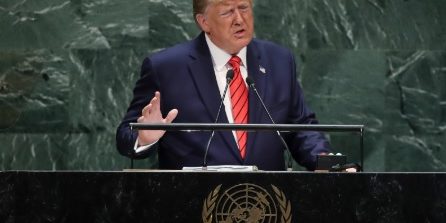 On September 29, President Donald Trump set out his nationalist political philosophy in his address before the UN General Assembly. Arguing that the nation-state is the best guarantor of human freedom and liberty, Trump set up a contrast between “patriots” and “globalists.”

“The future does not belong to globalists,” he said.

Jewish nationalists, that is, Zionists, could hear their core convictions echoed in Trump’s statement. Israeli political philosopher Yoram Hazony made much the same argument in his book, The Virtue of Nationalism, which was published last year.

One of the regimes most opposed to nationalism is the Iranian regime. Iran’s leaders view the regime not as the government of the nation of Iran, but as the leader of a global jihad, which will end with the regime’s domination of the world, in the name of Islam – not Iran.

Anti-Semitism is one of the animating doctrines of Iran’s regime. The leaders ascribe to genocidal Jew hatred. They use their commitment to annihilating Israel and war against the Jewish state as a means to build legitimacy for their regime and revolution throughout the Islamic world.

In his speech, Trump highlighted the regime’s anti-Semitism and its commitment to annihilate Israel.

Trump also excoriated the Arab world for refusing to recognize Israel’s right to exist, saying, “Fanatics have long used hatred of Israel to distract from their own failures.”