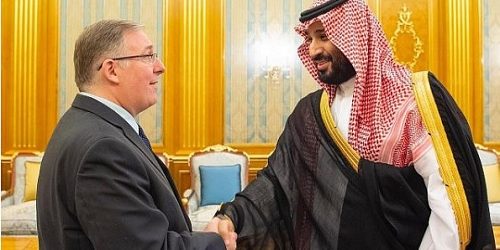 The meeting between Jerusalem resident Joel C. Rosenberg and one of the Gulf’s most powerful rulers came as Riyadh has attempted to increase its outreach to Evangelical leaders as it seeks to grow closer ties with Washington.

Rosenberg, a dual US-Israeli citizen, led a delegation of American Evangelicals on a three-day tour to Jeddah, the second group of high-profile church figures he has brought to the conservative kingdom in recent years.

Rosenberg, who has both Christian and Jewish ancestors, told his host, known colloquially as MBS, about his desire to see an Israeli-Saudi détente and said he hoped to see him visit Jerusalem soon.

“We had a fascinating discussion of Israel, the Palestinians and the peace process. While what he told us was off the record, we spent at least 30 minutes of our meeting discussing Israel,” Rosenberg told The Times of Israel.

“I told him I would love to see our two countries make peace, and look forward to the time when he would be ready to invite Israel’s prime minister to Riyadh and we are ready to invite him to Jerusalem.”

Rosenberg, who has two children currently serving in combat units in the IDF, said he told the future Saudi king about the biblical story of the Queen of Sheba, whom he described as a “powerful woman who ruled a kingdom on the Arabian Peninsula and decided to travel to Jerusalem to forge a friendship and alliance with Solomon, the King of Israel.”

Jerusalem and Riyadh are long known to have clandestine security ties, as both see in Iran an existential threat, but the Gulf kingdom does not formally recognize the State of Israel. Some pro-Israel advocates were hoping that MBS, 34, would be more open to consider diplomatic relations with Israel, but so far he has made no move toward recognition. Continue Reading….