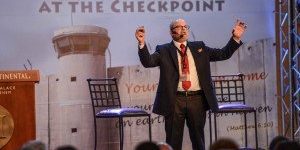 In the wake of the synagogue shooting last week in Pittsburgh, activists from several mainline Protestant churches came under fire for promoting a culture of anti-Semitism in their churches, especially the United Methodist Church.

The worst offenders are usually activists affiliated with the Presbyterian Church USA (PCUSA) and the United Church of Christ (UCC). But this year, the activists and officials from the United Methodist Church took on a leading role by hosting the controversial “Christ at the Checkpoint Conference” in Oklahoma.

The political goal of the conference was to flip American Christian support for Israel to the Palestinians. The conference soon took on a more sinister tone.

At one point, a speaker put up a slide of U.S. President Donald Trump surrounded by three of his advisers. The speaker asked the audience what was wrong with the picture.

Audience members answered that the problem was that they were Jews, apparently angry that the American president had Jewish advisors involved in the effort to achieve a peace deal.

Dexter Van Zile, a Christian scholar for CAMERA, reported about the conference. He told JNS: “At the time, when the audience was complaining about Jews in the Trump administration, I was disgusted at their flagrant anti-Semitism. But now, after hearing that the Pittsburgh gunman said the American government was ‘infested’ with Jews, I feel more than shaken by how it echoes what I heard at the Methodist-organized conference.” Continue Reading…