Israeli Minister Calls for Recognition of Sovereignty Over Golan Heights 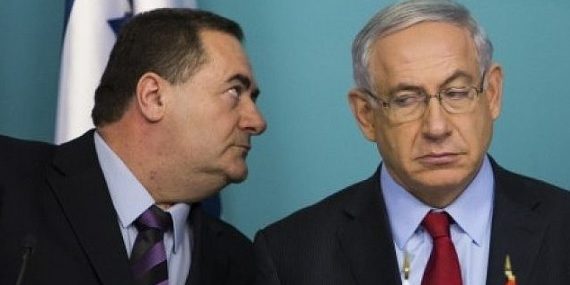 By The Media Line—

In an interview with the Reuters news agency on Wednesday, Intelligence Minister Israel Katz said that control of the area for the past 51-years is now top priority in diplomatic talks with the United States.

“I believe there is great ripeness and a high probability this will happen,” Katz said, predicting that the American government will assent to the move in “a few months.”
The Golan Heights, a plateau standing between Israel and Syria, is deemed vitally important from a military point of view for its strategic location overlooking the Sea of Galilee and the Hula Valley. The heights provide Israel with a key vantage point for monitoring developments in Syria, and its terrain acts as a natural buffer against any military incursion into Israel from Syria.

Encompassing an area of about 1,200 square kilometers (460 square miles), the Golan is also valuable territory for Israel’s lucrative wine industry. The terrain is considered ideal for viticulture due to its high elevation, plentiful water supply, cooler temperatures and rich volcanic soils.

The Golan Heights was part of Syria until Israel captured it in the 1967 War. In the decades since, over 20,000 Israelis have moved into the area, which is also home to roughly 20,000 Druze Muslims. In 1981, the Israeli government under then-prime minister Menachem Begin officially annexed the territory despite heavy criticism from the international community, which still does not recognize Israel’s claim to the land.

At times, Israeli governments have talked about returning the Golan to Syria in exchange for peace and recognition. But with the ongoing sectarian violence across the border and Iran’s influence over the regime of Bashar al-Assad, Israel seems more determined than ever to keep a firm grasp on the Heights.

In the interview with Reuters, Katz said: “This is the perfect time to make such a move. The most painful response you can give the Iranians is to recognize Israel’s Golan sovereignty—with an American statement, a presidential proclamation—enshrined (in law).”

Beyond Katz, several other Israeli politicians have similarly called on the U.S. to recognize the Golan as part of Israel.

The Jerusalem Post reported on Wednesday, that parliamentarian Yoav Kisch, a member of Prime Minister Binyamin Netanyahu’s Likud Party, wrote a letter to U.S. Ambassador to Israel David Friedman stating that “The Golan Heights has since developed and became an inseparable part of Israel.”

Kisch added that, “We believe an official American recognition of the Golan Heights as a sovereign Israeli territory would be a natural continuation of the current U.S. policy in our region.”

The Israeli push for U.S. recognition reflects broader efforts in international forums. Earlier this year, Netanyahu told UN Secretary-General Antonio Guterres that the Golan “will remain in the hands of Israel forever.”

If the Trump administration consents to recognize the Heights as part of Israel, what are the broader legal and security ramifications of such a decision?

Prof. Robbie Sabel, an expert in international law at Jerusalem’s Hebrew University, told The Media Line that “it is unlikely the U.S. will take a firm legal position on the sovereignty of area at the moment. Israeli law already applies to the Golan Heights and obviously there is no point in negotiating with the Syrian regime at present,” Sabel said.

“However, the Golan Heights has always been one of the issues that Israel has said it is willing to negotiate. The Israelis never managed to reach an agreement with the Syrians and the U.S. position has traditionally been not to take a stand on those issues which are subject to negotiation.”

Even though the United States has moved its embassy to Jerusalem, he explained, it was to west Jerusalem, “leaving out then the question of what the final status of east Jerusalem will be. One must assume that the American position will be the same for the Golan Heights.”

When it comes to what many consider a highly unpredictable American president who could buck long-standing policy on the issue, Sabel said, “It would be very rash of any Israeli lawyer to try and guess what President Trump is going to do. What I can say is what the traditional U.S. position is and the reasons for it.”

Alan Baker is an Israeli expert in international law and director of the Institute for Contemporary Affairs at the Jerusalem Center for Public Affairs. He told The Media Line that in his view there is no basis for Katz’s comments.

“The Golan Heights are part of Syrian territory and Israel extended its rule, administration and jurisdiction there because there was no written legal system in the area,” Baker said.
When Israel adopted the Golan Heights Law under Begin in 1981, he explained, the understanding was that there would still be negotiations between Israel and Syria over borders.

“Nothing came out of these negotiations. Therefore, it is still an open question,” Baker added.

Commenting on whether Katz’s comments are merely his own or represent a trial balloon on behalf of the prime minister or government, Baker said: “Every minister has the right to say what he wants, but this does not necessarily mean that there is any legal or political basis to it.

“He is expressing his opinion, perhaps a form of wishful thinking. I can’t see this actually materializing. And the American response might be that when the Israelis and Syrians negotiate peace, the status of the Golan Heights will be determined.”