The Jerusalem Embassy and the Triumph of Truth 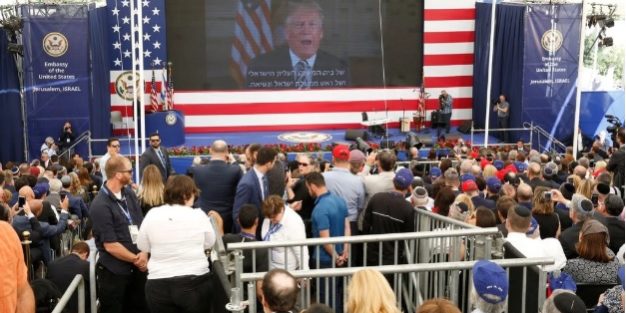 Monday’s ceremony marking the opening of the U.S. embassy in Jerusalem, Israel, had a clear message: It is time to embrace truth.

Kushner noted that accepting this fundamental truth is a critical foundation of any future peace between Israel and its neighbors.

“As Israel turns 70,” he said, “the search for a lasting peace turns over a new leaf, one of realism and of not being afraid to stand strongly with our allies for what is good, for what is right and for what is true.

“When there is peace in this region, we will look back upon this day and remember that the journey to peace started with a strong America recognizing the truth.”

For seventy years, and particularly since the initiation of the peace process between Israel and the PLO at a ceremony on the White House lawn on September 13, 1993, U.S. government policy has been to ignore and deny the simple fact that Jerusalem is Israel’s capital.

There were many reasons given to justify this unique — and, indeed, uniquely hostile — approach to Israel. Across 12 administrations, from Israel’s founding until last December, the Jewish state has been the only state in the world whose capital the American government refused to recognize.

The Americans said the UN General Assembly had determined in 1947 that Jerusalem should be under UN sovereignty administered as a “corpus separatum,” or area with no national sovereign. Put bluntly: they did not want to upset the Arabs. They said that since the Palestinians insist Jerusalem serve as a capital of a future Palestinian state, any recognition of Jerusalem as Israel’s capital would harm the prospects for peace.

The fact that the UN partition resolution of 1947 has no power of law, and was rendered null and void the moment five Arab states invaded Israel the day it declared independence, made no impression on American officials.

The fact that the Arabs needed the U.S. far more than the U.S. needed the Arabs also never made anyone in Washington wake up. They kept trouncing Israel’s basic rights as a means to appease Arabs who should have been appeasing the Americans who protected them and developed their oil fields, providing them with trillions of dollars of unearned wealth.

The fact that the Palestinians rejected three Israeli offers of peace and statehood — offers which included concessions over wide swathes of Jerusalem, including the Temple Mount — didn’t cause the State Department or the Clinton, Bush or Obama administrations to rethink their discrimination against truth and Israel.

Indeed, the more extreme the Palestinians became, the more unwilling the White House and State Department were to provide even backhanded recognition of Israel’s sovereignty over its capital city. The Obama administration was so hostile to the reality of Jerusalem’s attachment to Israel that the State Department edited its photo archives to remove the word “Israel” from captions of photos taken in Jerusalem.

No one ever seemed to realize that giving the UN or the Arab world or the Palestine Liberation Organization (PLO) veto power over the basic fact that Jerusalem is Israel’s capital did not advance the cause of peace. With Washington willing to sacrifice Israel’s basic right to its capital, the Palestinians had every reason to believe that eventually Washington would be willing to sacrifice Israel’s right to exist.

Kushner opened his remarks by noting, “Jerusalem is the eternal heart of the Jewish people.” It was such a simple statement of fact. Jerusalem stands at the center of Jewish faith, national identity and survival. Jerusalem is central to every Jewish ritual from birth to death. For three thousand years, Jews have prayed in the direction of Jerusalem three times a day. It is impossible to imagine the Jews surviving two thousand years of exile only to return to reconstitute their national homeland without Jerusalem.

And yet, despite all of this, for seventy years no U.S. administration would base its Middle East policy on a basic recognition of one of the eternal truths in human history.

No future administration will be able to reverse Trump’s decision without exposing itself as delusional and openly hostile to the Jewish people and the Jewish state. Whereas every president until Monday could say that he was pro-Israel while enacting a policy of deliberate discrimination against Israel, going forward, no such protestation will be taken at face value.

This change will require all administrations in the future to at least take the basic truth of Israel’s sovereign rights into account when they forge their policies towards it and towards the region.

Monday’s ceremony, unlike other memorable historic ceremonies involving Israel, wasn’t about reaching for the sky without relation to the ground below.

The 1993 signing ceremony on the White House lawn, which initiated the peace process between Israel and the PLO, reached for the sky while ignoring completely the absence of firm ground. The only one who seemed aware of the absurdity of the notion that PLO chief Yasser Arafat — the architect of modern terrorism, a mass murderer, and a genocidal Jew –hater had suddenly become a man of peace was then Israeli Prime Minister Yitzhak Rabin. Throughout the hour-long ceremony, as everyone around him beamed and strutted, Rabin stood next to then-President Bill Clinton, swaying uncomfortably. Rabin twitched. He stared at the ground. He took out his glasses and started cleaning them. He pulled out his speech and then folded it up again.

Rabin seldom looked at the crowd. He never smiled. And when Clinton compelled him to shake Arafat’s hand, bringing the crowd to its feet, Rabin looked like he was about to be sick.

Last week, Eitan Cabel, a long-serving lawmaker from Rabin’s Labor Party, said that if Rabin knew the devastating toll the so-called peace process with the PLO would take on Israel, he never would have agreed to it. In his words, “I think if he knew what the price Israel was going to pay in the wake of the Oslo… if I said that the Oslo Accords would never have come out — in my estimation — he would not have accepted or made the Oslo agreements as they were.”

But from the video of the ceremony, it is clear Rabin foresaw the devastation that permitting Arafat and his terrorists to enter Gaza and Judea and Samaria would wreak. It was written all over his face. He just couldn’t stand his ground for the truth, surrounded as he was by men who wished to be deceived by Arafat’s lies.

Rabin would no doubt have loved Monday’s ceremony. The people in attendance certainly did.

Indeed, perhaps the most noteworthy aspect of Monday’s event was how extraordinarily happy everyone there was. To the extent that guests at normal diplomatic events — embassy parties, signing ceremonies, etc. – feel any shared bond with one another, they generally feel the fraternity of members of the select set deemed important enough to merit an invitation.

On Monday, the feeling was different. From the front rows to the nosebleed section, from the press box to the military officers in the stands, everyone was happy and moved by what was happening. People didn’t act like elitists. There was no snobbery. Cabinet members walked around hugging attendees.

It wasn’t that the ceremony was fancy. It was devoid of opulence. No doves were sent flying into the sky. No random groups of schoolchildren were brought in to sit on the side, acting as props to demonstrate everyone’s commitment to the future, as happened at the White House ceremony Rabin stared at the ground and fidgeted like a caged lion throughout.

Monday’s ceremony was a simple affair. The embassy put up a big tent and rented stadium chairs. The guests were given water and pretzels, and a commemorative baseball cap and coin. One speech followed another. A singer performed a couple songs, and it was over. Ambassador David Friedman probably came in well under budget.

But it was spectacular all the same.

Because once it was over, everything had changed. After 70 years, the U.S. government, under President Donald Trump, had officially shifted U.S. Middle East policy.

What was heretofore predicated on denying the truth, is now based on acknowledging it. Americans, Israelis, and the nations of the world as a whole can only be grateful and hopeful today. The future is unknowable still. But grounded as it now is in truth, U.S. Middle East policy has a better chance of succeeding than it ever has before.