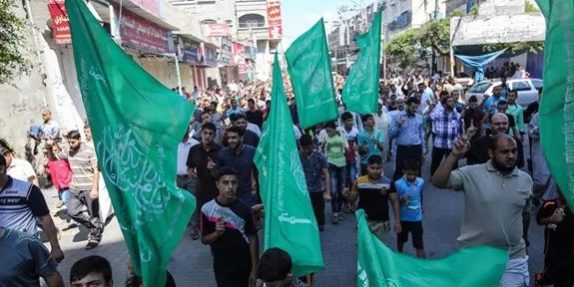 The world “should wait for our great move,” said a top Hamas leader, speaking to Palestinian protestors during violent clashes with Israeli forces along the Gaza border, “when we breach the borders and pray at al Aqsa.”

With hundreds around him chanting, “We are going to Jerusalem, millions of martyrs,” and with 20,000 Palestinians protesting along the border — some burning tires, others throwing Molotov cocktails and rocks — Yahya Sinwar declared during April protests that Hamas was “following in the path of martyr Yasser Arafat in resisting the enemy” and “if we explode we will explode in face.”

That Sinwar and other Hamas leaders made clear that their “March of Return” is only the latest tactic in their efforts to destroy Israel, however, hasn’t convinced much of the global community, the West, or the media to abandon its comfortable narrative – of a peace-loving Palestinian people in Gaza, driven to violence by an iron-fisted Israel.

Such is life as the world’s only Jewish state — with Hamas and other terrorist groups across its border in Gaza; with the more dangerous Hezbollah across its northern border in Lebanon; with terrorists roaming the Sinai; and with Hezbollah and Shi’a militias implanted amid the chaos of Syria.

However carefully it responds to violent efforts to breach its borders and attack its people, Israel finds itself falsely portrayed, second-guessed, and ultimately condemned. Thus, the current turmoil along Israel’s border with Gaza is playing out along predictable lines in the court of public opinion.

Hamas, which seeks Israel’s destruction and has run Gaza since ousting the Palestinian Authority in a violent coup in 2007, launched the “March of Return” on March 30 to remove the “transient border” between Israel and Gaza and fulfill the “right of return” of all seven million descendants of the Palestinians who fled their homes when Arab nations launched the 1948 war against the new Jewish state. (With such a full “right of return,” Palestinians would outnumber Jews in Israel, upending a state that emerged from the Holocaust and marked a people’s return to their historic homeland.)

The second such “march” came on Friday, April 6, and Hamas vows to mount one each Friday until “Nakba Day,” the annual day when Palestinians mark the “catastrophe” of Israel’s creation in May of 1948. For that day, the group promises a “march” that will include at least a million participants.

But these weekly “marches” aren’t marches at all. Like the rockets that Hamas launches into southern Israel or the tunnels it uses to infiltrate underground, these marches are violent efforts to breach Israel’s border — and they’ve left about 30 dead at the hands of Israeli forces that say all 30 were engaged in violent activity.

“Palestine and Jerusalem belong to us,” top Hamas leader Ismail Haniyeh declared this week. In an Orwellian twist, he termed the “March of Return” a “peaceful, civilized, and popular march.”

But Hamas is not only orchestrating the violence on Israel’s border; it’s incentivizing it. The group is paying $3,000 for the family of a “martyr” who dies in a confrontation with Israeli forces, $500 to protestors who are seriously wounded, and $200 to those who are moderately wounded. It’s also reportedly jailing bus drivers who refuse to take Gazans to the border to protest.

With Hamas laying bare its strategy, much of the world has nevertheless found it easier to blame Israel for the chaos.

The International Criminal Court’s prosecutor, Fatou Bensouda, warned both Israel and Hamas that each could be committing crimes — as if a terror group using violence to breach a border and a nation defending itself are equivalent.

The European Union’s High Representative Federica Mogherini called for an investigation of Israel’s use of “live ammunition,” said its force should be “proportionate,” and urged a “full opening of the crossing points.”

Sen. Bernie Sanders (I-Vt.), who exerts enormous influence over the Democratic Party’s activist wing, laid the blame squarely on Israel, tweeting, “The killing of Palestinian demonstrators by Israeli forces in Gaza is tragic. It is the right of all people to protest for a better future without a violent response.”

Maybe Israel’s critics don’t realize that with their one-sided condemnations, they’re emboldening Hamas. Or maybe they do.

Lawrence J. Haas is a senior fellow at the American Foreign Policy Council. He served as a former senior White House official and as senior communications director for Vice President Al Gore and is the author of, most recently, Harry and Arthur: Truman, Vandenberg, and the Partnership That Created the Free World.