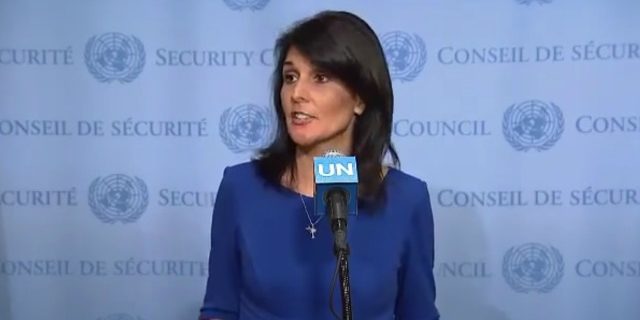 While attending the World Economic Forum in Davos, Switzerland on Thursday, US President Donald Trump again let loose on the Palestinian Authority (PA), accusing it of being the primary obstacle to peace.

“That money is not going to them unless they sit down and negotiate peace, because I can tell you that Israel does want to make peace, and they’re going to have to want to make peace, too, or we’re going to have nothing to do with it any longer,” said Trump of the large amount of financial aid the US contributes annually to the PA and international organizations supporting it.

Trump criticized past administrations for not leveraging American aid to persuade the Palestinians to adhere to signed agreements and be more pliable regarding their red lines.

As for Jerusalem, Trump insisted that, at least for the time being, it’s “off the table.”

Meanwhile at the UN Security Council, US Ambassador Nikki Haley was busy accusing Palestinian leader Mahmoud Abbas as being either unwilling or unable to actually make peace with Israel.

“We will not chase after a Palestinian leadership that lacks what is needed to achieve peace,” said Haley. “Peace will not be achieved without leaders with courage.”

She went on to note that all Abbas has done of late is reject “any American role in peace talks. He insulted the American president. He called for suspending recognition of Israel… Hate-filled speeches and end-runs around negotiations take us nowhere.”