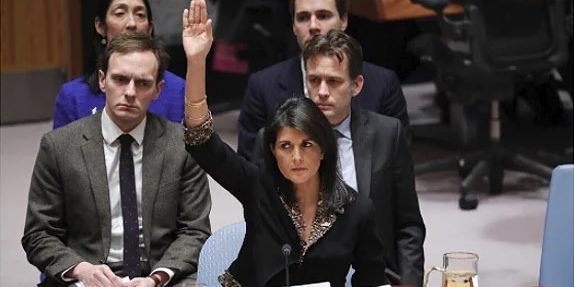 A total of 128 United Nations members thumbed their collective nose at the United States Thursday, voting to condemn President Trump’s decision to recognize Jerusalem as Israel’s capital, as U.S. law has mandated for two decades.

Trump warned before the vote that it could affect U.S. aid. The U.S., a key provider of aid worldwide, provides 23 percent of the U.N. budget, making it by far the largest contributor.

The vote in the U.N. General Assembly to formally condemn the U.S. decision regarding Jerusalem was 128-9, with 35 abstentions.

Supporting the condemnation were traditional American allies such as France and the United Kingdom. Israel and less influential members, such as Honduras, Guatemala, Micronesia, Nauru, Palau, Togo, Tonga and the Marshall Islands, joined the U.S. in voting against it.

Canada and several dozen others abstained.

WND reported U.S. Ambassador to the U.N. Nikki Haley warned prior to the vote that she would be “taking names” of nations that condemn the president’s decision.

The U.S. vetoed a similar resolution of condemnation in the Security Council earlier this week.

President Trump declared that the U.N. and nations that supported the resolution should expect consequences.