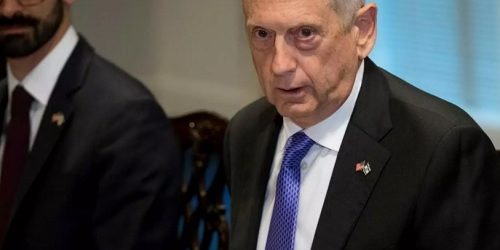 *Note the Israel-America Flag Pin on Mattis in the Photo!

Defence Secretary Jim Mattis has urged American soldiers to be ready for anything, saying that “storm clouds are gathering” over the Korean Peninsula.

Mr Mattis stopped short of forecasting any real armed conflict between the United States and North Korea, but emphasised that diplomacy with the rogue regime in Pyongyang is best backed up with the clear threat that American military might is at the ready.

“My fine young soldiers, the only way our diplomats can speak with authority and be believed is if you’re ready to go,” Mr Mattis told several dozen soldiers and airmen in North Carolina during a two-day pre-holiday tour of bases.

The comments came as the United Nations Security Council voted to impose strict new sanctions on Pyongyang that target one of the main financial sources of North Korea. The new sanctions would compel to sharply reduce the sale of oil reserves to North Korea, and would send back all North Korean expatriates within the next two years, a key source of income for Pyongyang.

In their efforts to convince North Korea to stop its quest for nuclear weapons capable of hitting the mainland United States, and from further proliferation, President Donald Trump and members of his administration have repeatedly threatened military action, should it come to that. In doing so, the Trump administration is hoping to pressure North Korea into negotiations, and also to put pressure on regional powers like China to push Pyongyang to stop their nuclear efforts.

In the meantime, the military is looking to be as prepared as possible for a potential conflict.

“Knowing what went wrong the last time around is as important as knowing your own testing, so that you’re forewarned — you know what I’m driving at here,” Mr Mattis told soldiers, recommending they read a book about the Korean War. “So you gotta be ready.”

Mr Mattis wasn’t all gloomy projections, though. He repeatedly insisted to the soldiers that he believed a diplomatic solution could still resolve the conflict, and said that he doesn’t believe North Korean leader Kim Jong Un would try anything untoward during the Winter Olympics next year in South Korea.