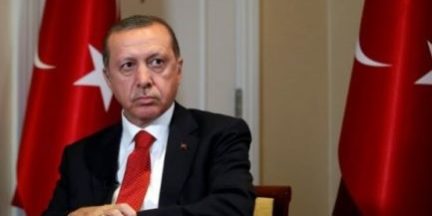 Israeli officials on Tuesday leveled harsh criticism at Turkish President Recep Tayyip Erdogan over his threat to sever diplomatic ties with Israel if U.S. President Donald Trump goes through with his plan to recognize Jerusalem’s as Israel’s capital.

Erdogan warned Monday that the move would be “a red line” for his country and the Muslim world, saying Ankara “won’t stand for it.”

“Jerusalem has been the capital of the Jewish people for 3,000 years and Israel’s capital for 70 years, regardless of whether Erdogan recognizes it or not,” one official said.

“We don’t take orders from the Turkish president nor do we respond to such threats,” Intelligence Minister Yisrael Katz said. “Israel is a sovereign state and Jerusalem is its capital. There is no more historically just move than to recognize Jerusalem as the capital of the Jewish people. The days of the sultan and the Ottoman Empire are over.”

Science and Technology Minister Ofir Akunis noted that “our ties to Jerusalem is stronger than our ties with Ankara. The relationship with Erdogan and Turkey is very important but we will not tolerate a diplomacy of threats. We need to bolster the American administration, which intends to announce the most basic and just thing: the recognition of Jerusalem as the capital of the Jewish people.”

Knesset Foreign Affairs and Defense Committee Chairman MK Avi Dichter (Likud) said, “No leader will ever be able to use threats to convince Israel on core national issues. Erdogan won’t be the first.”

Dichter, formerly the director of the Shin Bet security agency, noted that “the transfer of the Embassy to Jerusalem and recognizing Jerusalem as the capital of Israel are two steps that should have taken place 70 years ago. They are the missing pieces in the puzzle of Israel’s independence.”

Zionist Union leader Avi Gabbay said that “when my parents were in Morocco, they dreamed of coming to Jerusalem. They were able to realize their dreams and raise their children there. Jerusalem has been a symbol for the Jewish people for thousands of years before Erdogan, and it will remain a symbol after him.”