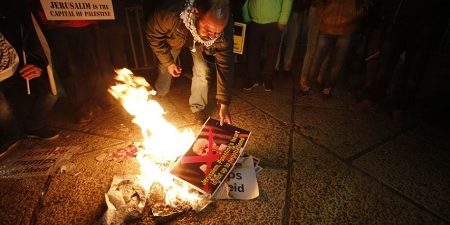 By Bradford Richardson, The Washington Times—

MSNBC host Chris Matthews said “crazy” evangelical Christians in the South are uninformed about President Trump’s decision to recognize Jerusalem as the capital of Israel because they have “mythical beliefs” about the ancient city.

“Don’t think this isn’t related to Alabama next week,” Mr. Matthews said Wednesday on “Morning Joe,” referring to the Alabama Senate race. “It is related, because it’s the Christian evangelicals down there with their crazy ideas about Israel, which is, I don’t know, mythical. They don’t understand the situation over there and how tricky it is ethnically and tribally. They don’t care, because it’s a religious belief. Trump’s playing to that this week. You watch him.”

The longtime “Hardball” host said the only hope for peace in the Middle East is to give Palestinians a “portion of East Jerusalem, maybe all of it.”

“Because if you don’t give the Palestinians hope that they can have national integrity and have a capital where it should be, you’re going to have an unending problem,” he said.

“By the way, deaths are coming now because of this,” he said. “You can just bet that in the next few weeks, we’re going
to have hell to pay for this totally erratic decision by this president.”