From Mueller to Mandelblit 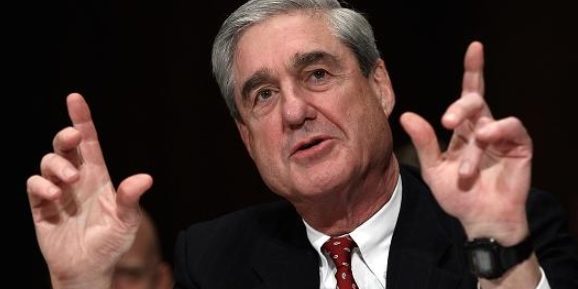 There are stunning parallels between US Special Counsel Robert Mueller’s probe of alleged collusion between US President Donald Trump’s presidential campaign and Russia and the ongoing criminal probes against Prime Minister Benjamin Netanyahu and his wife Sara.

Monday, after a weekend filled with speculation due to an illegal media leak regarding sealed grand jury indictments, Mueller and his team indicted two former Trump campaign officials, Paul Manafort and Richard Gates, for offenses related to their business and lobbying actions allegedly carried out between 2006 and 2014.

Mueller also announced that George Papadopoulos, a junior campaign aide, pled guilty to lying to investigators about a meeting he tried to arrange between then candidate Trump and Russian President Vladimir Putin.

As commentators across the political spectrum have noted, none of the charges against Manafort and Gates have anything to do with Trump’s presidential campaign.

As for Papadopoulos, his story exculpates rather than implicates Trump’s campaign in collusion with Russia.

Not only did Papadopoulos’s boss on the campaign reject his offer to arrange a meeting between Trump and Putin, the actions described in his indictment demonstrate that the Trump campaign had no significant ties to the Russian regime.

And yet, despite the apparent absence of collusion between the Trump campaign and Russia, no one expects Mueller to close down shop. To the contrary.

The Manafort and Gates indictments and the Papadopoulos plea tell us that Mueller has abandoned the stated purpose of his investigation. Having found no evidence of collusion – criminal or otherwise – between the Trump campaign and Russia, he has decided to investigate the business dealings of Trump and his associates going back decades.

Mueller’s move demonstrates that he does not view it as his job to incriminate or exonerate Trump regarding alleged collusion with Russia. Indeed, he doesn’t view it as his responsibility to investigate Russian involvement in the 2016 elections at all.

If he thought that was his job, then Mueller would not be expanding his writ to include alleged crimes carried out by Trump’s associates that any US attorney could be investigating. He would be expanding his probe to include the growing mountain of evidence of collusion on the part of Democratic presidential nominee Hillary Clinton, the Democratic National Committee and their attorneys, as well as Mueller’s friend and successor as FBI director, James Comey, with foreign agents, including Russian government officials, during and in the aftermath of the 2016 presidential campaign.

Mueller’s apparent refusal to follow the evidence where it leads him regarding Russian involvement in the 2016 elections and his decision instead to investigate any and all suspicions against Trump and his associates whenever the events in question may have taken place tells us that he views himself as a hunter, not an investigator. His prey is Trump.

Mueller will continue to hunt Trump until one of three things happen.

Mueller may eventually find something – anything – to charge Trump with. Such a finding will precipitate an impeachment hearing in Congress that could lead to Trump’s removal from office.

His hunt may find nothing against Trump, but just as it netted Manafort, Gates and Papadopoulos this week, it may bring down other people related to Trump. At a minimum, his continued probe will keep those close to Trump under continuous investigation. In this case, Mueller’s probe will dominate Trump’s presidency and make it impossible for Trump to govern in accordance with the agenda he was elected to advance.

The third possible outcome is that Trump fires Mueller and ends his probe or that Congress defunds his probe or limits its duration. Such moves would require the unanimous support of congressional and Senate Republicans, which currently is not on offer.

The threat that Mueller’s investigation represents to US democracy couldn’t be clearer.

By making it clear through their actions to date that they will not stop their investigation until they get Trump, Mueller and his associates apparently view their investigation as a means to either overturn the election results or render them irrelevant. If Trump is either pushed out of office or denied the ability to govern in accordance with the agenda he ran on, then Mueller will have achieved that goal.

This then brings us to Netanyahu.

Netanyahu and the political Right won a massive electoral victory in 2015. For the first time in many years, the Right won indisputably. There are no coalition partners who place appeasing the PLO at the top of their governing agenda or even in the middle of their agenda.

Shortly after the election, the anti-Netanyahu media, with the support of police investigators, went on a hunt to find something – anything – to force Netanyahu from office. In the end, all they could come up with were two otherwise absurd allegations.

First, that Netanyahu received too many gifts from his wealthy friends. Specifically, he allegedly received too many cigars from his friend Arnon Milchen. Second, Netanyahu taped himself discussing with his nemesis, Yediot Aharonot publisher Arnon Mozes, the possibility of winning less adversarial coverage from Yediot Ahronot in exchange for lobbying Israel Hayom, which is owned by Netanyahu’s friend Sheldon Adelson, to cut back its circulation and so diminish its competitive edge over Yediot. This discussion, which came to nothing, was discovered by police investigators during their investigation of Netanyahu’s former chief of staff for alleged crimes unrelated to Netanyahu.

If the allegations were directed against any other politician, there is no doubt that they would not have led to police investigations. The late president Shimon Peres’s legendary use of the public trough to pay for his lavish parties and lifestyle were never the subject of investigation. Former prime minister Ehud Barak never faced investigation over his allegedly sketchy business dealings or his deeply suspect campaign financing operations. Former prime minister Ehud Olmert was never investigated for the massive collection of expensive pens that he was showered with by “friends” during his tenure in government.

And none the 43 lawmakers who voted in favor of a bill backed by Mozes to shut down Israel Hayom were ever investigated for their votes.

But with Netanyahu, with the prodding and active support of the media the police are pursuing multi-million shekel investigations around the world to find and interrogate Netanyahu’s friends and ask them about their gifts to him. Police Commissioner Roni Alsheich has hired Lior Horev, one of Israel’s top anti-Netanyahu political consultants, to serve as the police’s public relations representative.

As for the probes against Sara Netanyahu, every day the public is treated to yet more salacious, unsubstantiated tales of her alleged abuse of workers at the Prime Minister’s Residence.

While Attorney General Avichai Mandelblit did not initiate the probes against Netanyahu, he has done nothing to stop them. This despite their demonstrably prejudicial nature. Mandelblit is a product of the system that has turned the police, media and state prosecution into a political party united in their common goal of hunting the political Right. As a result, he can be expected to go along with whatever they do. If the police recommend indicting Netanyahu, Mandelblit can be counted on to dutifully indict him, even though the acts he is suspected of committing are not crimes.

Given the current dynamic, the only way for Netanyahu not be forced from office for actions that aren’t even criminal is for his political associates to rein in the out of control police and state prosecution by limiting their authority. So far, the media have cowed them into inaction.

In the Mueller probe and the incessant probes against Netanyahu we see the new face of the Left. Unable to win elections, they exploit their control over the bureaucracy and media to overturn election results.

There can be no greater threat to the health of a liberal democracy than that.

Two things must happen for this situation to be corrected.

First, we must recognize what is happening and what it means for our systems of governance. Second, lawmakers in Congress and the Knesset alike need to stand up to the media and the legal fraternities and bravely restore the power to govern to those in whom the public has vested it.