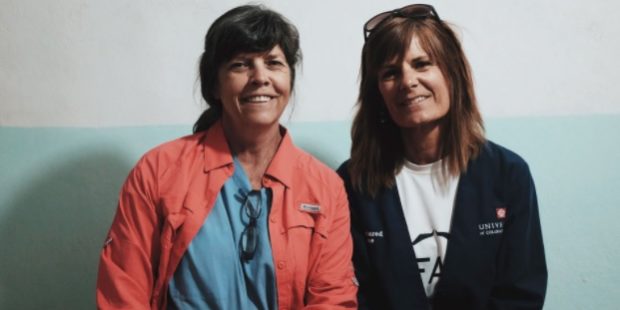 CBN News was given an exclusive look at what up until now was a secret IDF mission. It’s a one-of-a-kind Middle East story that combines the Israel Defense Forces, a Christian ministry and the brutality of the Syrian civil war.

The story begins on the Golan Heights in the dead of night. Israeli soldiers are inside Syria using night vision goggles, flashlights and hope because Israel is providing life-saving medical supplies for Syrians caught in their long and bloody civil war.

For this mission, they have a Christian partner, an aid group called Frontier Alliance International or F.A.I.

“We support the State of Israel and we love the Jewish people,” said Dalton Thomas, founder of F.A.I. “So to be able to engage the Syrian crisis through the Israeli border in cooperation with the Israeli army is a huge privilege for us as an organization.”

F.A.I.,with the help of the IDF, sent a Christian medical team deep inside Syria.

After a seven-week tour of duty in a Syrian village, Dr. Sally Parsons and trauma nurse Debbie Dennison returned to the Israeli side of the border.

In footage CBN obtained from the IDF, Parsons is asked if it was a long trip. He suggested, “it was very good though, very good.”

Parsons and Dennison served in a makeshift hospital treating Syrians wounded in their civil war fighting the Assad regime.

Both women said it was their faith that led them into the war zone.

“Because the Lord calls us into all the world to all the nations and I specifically, I can’t speak for the others, but I specifically felt God told me this is what I was supposed to be doing,” Parsons told CBN News.

“You had to count the cost. You had to say ‘do I love you enough that I’m willing to lay down my life?’ Of course and my answer was ‘yes’,” Dennison told CBN News.

Parsons – a surgeon for 30 years – faced surgeries she had never done before. When the team didn’t know what to do, they turned to prayer and YouTube.

CBN obtained footage of Parsons and Dennison looking at YouTube video of surgery on a smart phone while standing in the operating room ready to perform surgery.

They watched YouTube and discussed the surgery: “So that’s exactly what I need, that’s lateral. How many incisions, three? How many compartments? You got me, I think it’s probably two but cutting the skin. Okay, so they’re just going lateral.”

The video, prayer and the surgery saved the man’s leg.

And then there were the babies born.

“It’s what sustained us, to be able to see new life in such a horrific war. It was just a blessing beyond belief,” Parsons said.

Parsons and her team sent the worst cases back to Israel.

Their mission was just one part of a larger Israeli project called Operation Good Neighbor. Israel provides food, fuel, water and medical treatment for Syrians – their next door neighbors and historic enemy. So far Israel has treated more than 5,000 Syrians in Israeli hospitals.

IDF Major Sergey serves as the Operation Good Neighbor chief medical officer. We asked him why Israel would mount such an operation.

“For our side this is a very simple question,” Sergey told CBN News.

“I can’t see the other side of the border that’s starving in his place and bring him help. This is a huge situation that they live there and this is my point, my opportunity to bring them help and they need this. This is the point,” Sergey continued. “So, if they need this and I can give them, I am very proud to do this.”

“I don’t know of another military in the world who would prioritize affectionate engagement with their enemy to build a good neighborhood,” Thomas said of Israel.

“I mean you think about, irrespective of politics or military strategy or whatever. What the IDF has done over the last five or six years since the revolution started, has said ‘Hey let’s put politics to the side and let’s seek to build a good neighbor, a good neighborhood by being good neighbors,” Thomas explained.

“People are people no matter what label we put on them, Muslim or Christian or Jew or whatever label we tend to put on them but underneath their label they are men they are women that have the same needs,” Dennison said.

“They have the same pains and the same hurts that we do and they need the same compassion and love. No matter what the barriers all people respond to love. And we were as Christians going into a community. They didn’t know us. They have a historic animosity toward Christians, but all it took was an expression of love and we were welcomed with open arms,” she added.