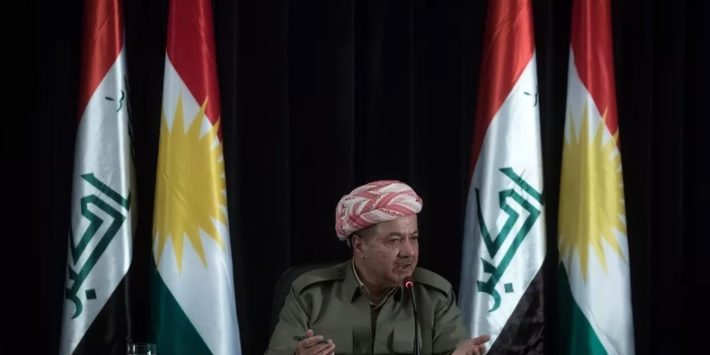 You have to hand it to the Iranians. They don’t play around. Just hours after President Donald Trump gave his speech outlining the contours of a new US policy toward Iran, senior Iranian officials were on the ground in Iraq and Syria not only humiliating the US, but altering the strategic balance in Iran’s favor.

Last Friday Trump said that from now on, the nuclear deal his predecessor Barack Obama concluded with the Iranian regime would be viewed in the overall context of Iran’s many forms of aggression. Iran’s support and direction of terrorism, its subversion of neighboring regimes, regional aggression, weapons proliferation, development of ballistic missiles and harassment of maritime traffic will no longer be dealt with in isolation from Iran’s nuclear program.

Trump pledged that it will henceforth be US policy to ensure that Iran is made to pay a price for all its aggressive actions, including its breaches of the nuclear deal.

Among other things, Trump singled out Iran’s Revolutionary Guards Corps for its role in sponsoring and engaging terrorism. He came within a hair’s breadth of defining the IRGC as a foreign terrorist organization. But words to one side and actions to the other.

The Kurds have been autonomous in Iraq since 1992 and have exercised de facto sovereignty over Iraqi Kurdistan since 2003. One of their chief disputes with the central government in Baghdad was control over the oil rich city of Kirkuk, adjacent to autonomous Kurdistan. Kurds make up a large majority of the population of the city.

That dispute seemed largely settled three years ago when in the summer of 2014, Kurdish Peshmerga forces took over the oil town and other areas south of their official territory. The Kurds moved in after government forces fled Kirkuk and other areas, in the face of Islamic State’s offensive.

The Kurds played a key role in the anti-ISIS campaign.

Both in Iraq and Syria, the Kurds have been the US’s only reliable ally. Iraqi regime forces, like the Shi’ite militia that fight alongside them, are controlled by Iran.

Masoud Barzani, the president of the Kurdish Regional Government in Iraq and the head of the Kurdish Democratic Party (KDP), thought that ISIS’s defeat in Iraq and Syria was the right time to call in the US debt to the Kurds for the central role they have played in the fight to defeat ISIS.

And so on September 25, he held a referendum on Kurdish independence. Nearly 93% of Iraqi’s Kurds voted in favor.

Support for independence is so overwhelming that even the Talabani family supported the referendum.

Jalal Talabani, the head of the Talabani clan, served in the ceremonial position of Iraqi president from 2005 until 2014. He was the leader of the Patriotic Union of Kurdistan or PUK party.

On Saturday, flanked by the Iraqi Shi’ite militia commanders – two of whom are on the FBI wanted terrorists list – Soleimani told the Talabanis to support the restoration of Iraqi government control – that is, Iranian control – over Kirkuk.

Ala Talabani, Jalal’s niece, told an Arabic television station that Soleimani came to pay his respects to her late uncle. According to The Washington Post, Ala Talabani praised Iran’s role in Iraq and said, “Soleimani advised us that Kirkuk should return to the law and the constitution, so let us come to an understanding.”

In other words, he offered them a deal.

In an article in The American Interest, Jonathan Spyer, director of the Rubin Center at the Interdisciplinary Center Herzliya, said the deal was concluded the next day between one of the Shi’ite militia leaders and Bafel Talabani, Jalal’s eldest son. Based on Kurdish media accounts, Spyer wrote that the deal involves establishing “a new authority in the Halabja-Sulaymaniyah-Kirkuk area to be jointly administered by the Iraqi government and the ‘Kurds’ (or rather the PUK) for an undefined period.”

Spyer summarized, “The federal government would manage the oil wells of Kirkuk and other strategic locations in the city, while also overseeing the public-sector payroll.”

So two days after Trump’s speech, the Iranians and the Talabani family agreed to split Iraq’s Kurds in two and set up an Iranian puppet in the new governing authority, killing any thought of an independent Kurdistan.

So far, the deal has gone off without a hitch. The Peshmerga forces in Kirkuk, which are loyal to the Talabani family, abandoned their posts on Monday when the Soleimani-controlled combined force of US-armed and -trained Iraqi government forces and Shi’ite militias took over Kirkuk and other areas.

Despite Trump’s stated position in favor of weakening Iranian power and influence, and despite the fact that the occupation of Kirkuk was directed by the IRGC, which Trump just sanctioned, the Americans to date seem fine with this outcome.

According to Kurdish and US commentators, Iran or no Iran, Iraqi Prime Minister Haider al-Abadi wouldn’t have dared to order the strike on Kirkuk without US agreement.

It’s true that the US has never gone out on a limb for its Kurdish allies. Despite the fact that 1,700 Peshmerga fighters were killed fighting – and defeating ISIS – over the past three years, and despite the fact that an independent Kurdistan would constitute a severe blow to Iran’s hegemonic ambitions in the region, the US vocally opposed last month’s referendum. Following the vote, US officials told reporters that since Barzani ignored their position, they feel they owe him no loyalty.

And indeed, the US couldn’t be more disloyal than it is today – siding with Iran against America’s only dependable ally in Iraq.

The implications of Iran’s successful strategic offensive against the Kurds are disastrous for the US. Iran’s establishment of a Kurdish satrapy in Iraq harms the US in three ways.

First, America’s only stable Iraqi ally is now destabilized. For the past several years, the Barzanis and Talabanis had managed to more or less bury the hatchet, each content with their own sphere of influence. Now, they are once again at each other’s throats. Even if the Americans never asked them to do it, Iraq’s Kurds protected America’s interests in Iraq. And their prosperity and stability were viewed as an American achievement.

Now that is a thing of the past.

Second, Iran’s successful neutralization of the Kurds clears away the only major obstacle to Iranian hegemony over Iraq. This development has major implications for the region. If there is no safe base for operations against Iran in Iraq, any plan to block Iran’s regional rise has become far more complicated.

And finally, the US’s reputation and its strategic credibility in the region and beyond have just taken a massive hit. Until Soleimani’s forces marched into Kirkuk, it was possible to believe that the US’s recent preference for Iran over its own allies was a function of Obama’s radical worldview.

Now that Trump is in office, the policy was effectively over.

In the face of the US’s betrayal of the Kurds to the benefit of Iran, that position is no longer credible. Trump can claim till he’s blue in the face that he has abandoned Obama’s Iran policy, but so long as Iraqi government forces control Kirkuk – for Iran – his claims only discredit him.

The consequences of the US’s acceptance of Iran’s Kurdish gambit are already being felt on the ground. On Thursday, the Washington Post reported that Syrian Kurds, who just this week led the forces that defeated ISIS forces in Raqqa, are now concerned that the US will abandon them as well. Syrian Kurds now exercise autonomy. But with ISIS now defeated, Syrian Kurds fear the US will withdraw its forces from Syria and allow them to be overrun by Assad regime forces controlled by Iran and Hezbollah.

Luckily, not everything is black. Israel isn’t the US. But it is more powerful than the Kurds. And Israel is doing what it can to both help them and curb Iran’s expanding power. This, even as Trump seems incapable of translating his positions into policies on the ground.

The same day Iranian-backed forces were taking control of Kirkuk, Israel both destroyed a Russian- made anti-aircraft battery in Syria in retaliation for Syria’s targeting of IAF jets, and welcomed Russian Defense Minister Sergei Shoigu to Israel for his first visit in office.

Israel’s willingness to attack the Syrian battery the day Shoigu arrived made clear that Russian support for its Syrian client is not unconditional.

This was brought home yet again and more powerfully the next day. On Tuesday, Maj.-Gen.

Mohammad Bagheri, chief of staff of the Iranian military, made an official visit to Damascus.

While he was there Prime Minister Benjamin Netanyahu called Russian President Vladimir Putin to talk to him about Iran’s nuclear weapons program and its increased presence in Syria. Netanyahu also beseeched Putin to support Kurdish independence in Iraq.

Interestingly, it was Putin’s office, not Israel, which revealed the call had taken place.

Russia’s willingness to accept Israeli air strikes in Syria and to openly work with Israel indicates that Iran may have overstepped the boundaries. It is possible that Russia is not interested in having an empowered Iranian ally. Given past Russian practice, it is likely that Russia would like to see Iran weakened and therefore more dependent on Moscow.

Then there are the Germans and British. Whereas German Chancellor Angela Merkel and British Prime Minister Theresa May came out strongly for maintaining the nuclear deal with Iran, both leaders indicated this week that they are willing to take a stronger stand against Iranian support for terrorism, missile development and regional expansion. Netanyahu reportedly has spoken at length to both leaders, and to a host of others, in recent days lobbying them to support the anti-Iranian Kurdish regional government.

By not abandoning the Kurds and by continuing to press for the West – including the Trump administration – to support Barzani and his government, and by pushing back against Iran’s empowerment in Syria, Iraq and Lebanon, Netanyahu is trying to exploit and expand Iran’s weaknesses. He does this even as Iran’s strengths become more obvious and Iran’s power rises against an America that remains strategically adrift.

But they do make it clear that Iran’s rise is not unstoppable. There are plenty of actors with plenty of reasons to oppose Iran’s empowerment. And once they see the danger Iran poses to them, working together and separately, they can help to cut it down to size.

At some point, the Americans may come to their senses and finish off the job.