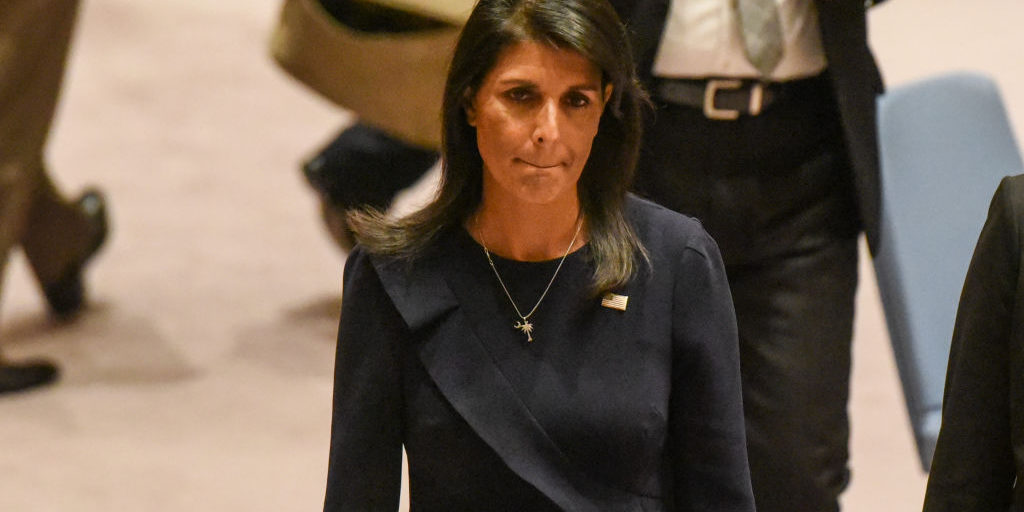 The State Department announced on Thursday that the United States would be withdrawing from the UN agency UNESCO.

The U.S. agency citied financial reasons, the need for reform and the body’s “continuing anti-Israel bias.” President Trump’s decision to leave UNESCO – the United Nations Educational, Scientific and Cultural Organization – as of December 31, 2018, was an appropriate foreign policy decision that will hopefully prompt a much-needed rethink of the United Nations, its purpose and practices. It will also send a strong message to the Palestinians that statehood cannot be achieved on the basis of UN resolutions alone, and that the only way forward is to engage in direct negotiations with Israel, during which mutual sacrifices will be required.

In the aftermath of WWII, the intended goal of the Paris-based UN body was a noble one: to promote basic freedoms and security through international collaboration on education, science and cultural projects. UNESCO-sponsored projects focused on literacy, vocational training, equal access to basic education and preservation of human rights and historical sites are indeed praiseworthy. In practice, however, the 195-member body – with its automatic anti-Israel majority that exists in every institution of the UN – has become a springboard for Jew hatred and the rewriting of history.

To be sure, UNESCO is far from the only UN agency regularly to single out Israel for reproach. Yet, its anti-Israel adoptions have been abhorrent even by the low standards established by the broader multilateral institution. Consider a resolution introduced in May, which denied Israel – and the Jewish people’s – legal and historic ties to the city of Jerusalem, including its holiest sites. It called the Cave of the Patriarchs in Hebron – considered the resting place of the Jewish Patriarchs and Matriarchs – and Rachel’s Tomb near Bethlehem, “Palestinian sites.” Shamefully, this vote was deliberately held on Israel’s Independence Day. Only two months later, the cultural body convened in Krakow, Poland – a city soaked in Jewish blood – and declared the city of Hebron, holy to Jews, an endangered Palestinian heritage site.

Even for some of the harshest critics of Israel, this historical ignorance is sometimes too much to swallow. In October 2016, for example, when UNESCO passed a resolution denying Israel’s connection to the Temple Mount and the Western Wall – referring to them only by their Muslin names – UNESCO chief, Irina Bokov (whose intentions and motivations are themselves often curious) questioned the text of the Arab-sponsored resolution on Jerusalem.

This egregious distortion of history is not particularly surprising when considering the anti-Semitic political culture that has come to underpin UNESCO, particularly since 2011, when it became the first UN agency to admit the Palestinians as a full member. Hillel Neuer of the watchdog organization, UN Watch, noted that between 2009-2014 the cultural body has adopted 46 resolutions against Israel, yet only one on Syria and none on Iran, Sudan, North Korea, or any of the other known violators of human rights around the world. In fact, a representative of the regime of Syrian dictator and mass murderer Bashar al-Assad sits on a UNESCO human rights committee.

Neuer further highlights this double standard: “UNESCO paid tribute to mass murderer Che Guevara, elected Syria to its human rights committee, and created prizes named after the dictators of Bahrain and Equatorial Guinea, whose ruler Obiang says God empowered him to kill whomever he wants. UNESCO has a noble founding mission, but that has been completely hijacked by the world’s worst tyrannies and supporters of terror.”

This is not the first time that the United States has pulled out of the hypocritical UN cultural body. Under President Reagan in 1984, the United States walked away from UNESCO owing to financial mismanagement and “hostility toward the basic institutions of a free society.” It was only in 2002 that President G.W Bush re-joined the body and stated that the United States wanted to “participate fully in its mission to advance human rights, tolerance and learning.” But this vision was upturned when President Obama halted funding to the UN body in 2011 (US funding at the time accounted for one-fifth of UNESCO’s budget) when Palestine was accepted as a full member. This original level of financial support has not been restored and the cultural body has since missed out on close to $600 million of American funding.

Among the reasons are that by withdrawing from UNESCO – again – President Trump is sending a powerful message to the international community: the United States will no longer tolerate international organizations that serve as forums for Jew-bashing. This important message was encapsulated in a powerful statement made by U.S. Ambassador to the United Nations, Nikki Haley: “The purpose of UNESCO is a good one. Unfortunately, its extreme politicization has become a chronic embarrassment…US taxpayers should no longer be on the hook to pay for policies that are hostile to our values and make a mockery of justice and common sense.”

The political thinker Charles de Montesquieu famously said: “There is no crueller tyranny than that which is perpetuated under the shield of law and in the name of justice.” It is precisely because UNESCO purports to be a cultural and educational body that its false credibility masks its pervasive bigotry.

On Friday afternoon it was announced that former French Culture Minister Audrey Azoulay – a Jewish woman – was elected as UNESCO Chief. Azoulay said that “UNESCO is going through a profound crisis” but that she hopes to fix it from within. I hope she succeeds in this mission. I hope she can turn UNESCO from an organization that promotes bigotry in the false name of culture, into one that opposes all forms of bigotry. Given the nature of its voting membership, this will not be easy, but with pressure from the U.S., it may have a chance of succeeding. Perhaps then the U.S. will maintain its membership in and financial support for UNESCO.

Alan M. Dershowitz, Felix Frankfurter Professor of Law, Emeritus, at Harvard Law School and author of, “Trumped Up! How Criminalization of Political Differences Endangers Democracy,” which is now available.