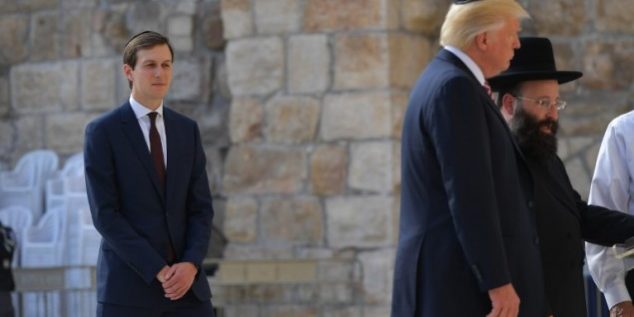 BY RAPHAEL AHREN, Times of Israel—

Senior White House adviser Jared Kushner is to travel to the Middle East this week to meet with Israeli and Palestinian officials in an effort to advance peace efforts pursued by his father-in-law US President Donald Trump.

Kushner will travel along with special envoy Jason Greenblatt to meet with Prime Minister Benjamin Netanyahu and Palestinian Authority President Mahmoud Abbas separately in the coming days, to discuss “their priorities and potential next steps,” a senior White House official told The Times of Israel.

“It is important to remember that forging a historic peace agreement will take time and to the extent that there is progress, there are likely to be many visits by both Mr. Kushner and Mr. Greenblatt, sometimes together and sometimes separately, to the region and possibly many trips by Israeli and Palestinian negotiators to Washington, DC, or other locations as they pursue substantive talks,” the senior official said.

Greenblatt is expected in the region on Monday, followed by Kushner on Wednesday.

“Even while working behind the scenes to advance direct, bilateral negotiations between the parties, we will continue to communicate with the relevant constituencies throughout the region,” the senior official said, “to remind all that peace is possible and to demonstrate the many positive benefits that would arise from a successful negotiations.”

The official said the two will “continue conversations” with Israeli and Palestinian leaders, following their trip last month to the region with the president himself. Trump met with both Netanyahu and Abbas and a host of other officials in pursuit of what he has called “the ultimate deal.”

Kushner and Greenblatt have been tasked by Trump with relaunching the peace process and have indicated that the president would advance quickly on the matter.

The White House indicated Sunday that no major breakthroughs were expected but that “the president has asked some of his most trusted advisers to spearhead the peace effort.”

“President Trump has made it clear that working toward achieving a lasting peace agreement between the Israelis and Palestinians is a top priority for him,” the White House official said. “He strongly believes that peace is possible.”

Trump, in a keynote speech at the Israel Museum on his last day in the region, pushed for peace between Israel and the Palestinians, calling on both sides to put aside the “pain and disagreements of the past” and declaring his belief that both Israeli and Palestinian leaders are “ready to reach for peace.”

Kushner was a key architect of Trump’s trip to Israel and Palestinian areas on May 22-23, which the White House hailed as a success.

In concluding the trip last month, a White House official also said the US would be working on building strong relationships in the Middle East between Israel and its Arab neighbors that would create momentum for a peace deal between Israelis and Palestinians.

The official said at the time that “the first step … is to bring relationships that are warm and strong privately and bring them more public and also set forth a common set of principles that everyone wants to abide by.”