Bennett submits bill to make it ‘impossible’ to divide Jerusalem 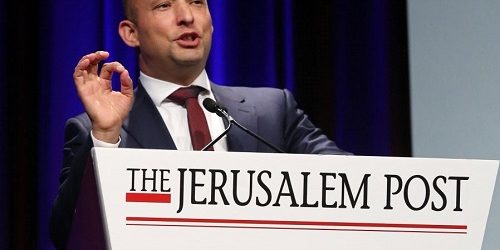 BY RAOUL WOOTLIFF, Times of Israel—

Education Minister Naftali Bennett formally proposed legislation Sunday that would require a special two-thirds Knesset majority on any decision to divide Jerusalem under a future peace deal with the Palestinians, saying that the bill would effectively make such a move “impossible.”

Bennett, who leads the pro-settlement Jewish Home party, is seeking to amend the Basic Law on Jerusalem so that any future vote to divide the city would require the approval of 80 of the 120 MKs to pass, as opposed to a regular majority.

“The purpose of this law is to unify Jerusalem forever,” Bennett said of his legislation in a statement. “Reaching a majority of 80 MKs in order to divide Jerusalem is impossible and has no feasibility in the Knesset, which is why this law is so important.”

Currently the Jerusalem Law, passed in 1980 and amended in 2000, states: “No authority that is stipulated in the law of the State of Israel or of the Jerusalem Municipality may be transferred either permanently or for an allotted period of time to a foreign body, whether political, governmental or to any other similar type of foreign body.”

With no provision in the Basic Law specifying how it can be amended, it currently can be overturned with a simple majority. Bennett’s proposal would add a clause requiring the supermajority.

The bill was submitted to the Ministerial Committee for Legislation, presided over by Bennett’s fellow party member Justice Ministry Ayelet Shaked. It is expected to face a vote by cabinet ministers within two weeks after facing a legal review, a spokesperson for the party said.

Speaking earlier Sunday at the weekly cabinet meeting, Bennett said he was confident the measure would gain the support of his government colleagues. “I am convinced the entire coalition and sensible opposition will join forces behind this important legislation… I am certain the bill will easily pass.”

The Jewish Home chair added that he was concerned a future temporary coalition may agree to divide the city, whose eastern neighborhoods, including the Old City, are claimed by the Palestinians for their future capital.

“Timing is crucial, since it is important to make clear, before the start of a diplomatic process, that Jerusalem will never be divided under any circumstance,” Bennet said. “The ideas put forward by Ehud Barak in 2000 and Ehud Olmert in 2007 to hand over the Old City, Temple Mount and the Mount of Olives to the Palestinians — are obsolete.”

A spokesman for the Jewish Home party said last week that the proposed legislation was intended to strengthen Prime Minister Benjamin Netanyahu’s position vis-a-vis the new administration of US President Donald Trump.

Last month, hours before Trump arrived in Israel during his first major foray abroad as president, Netanyahu declared that Israeli sovereignty over Jerusalem’s holy sites was not up for negotiation and said the city will always be Israel’s capital.

Trump has expressed his desire to reach a Palestinian-Israeli peace agreement, which he has described as the “ultimate deal.”

In recent months the United Nations cultural body UNESCO has passed a series of resolutions that diminish or deny the Jewish connection to Jerusalem and refer to Israel as an occupying power.

Israel annexed East Jerusalem in 1980, but the move has not been recognized internationally and most countries refuse to recognize any part of the city as Israel’s capital, saying it was an issue that will need to be decided in negotiations with the Palestinians.

Times of Israel staff contributed to this report.