‘Dome of the Rock inspired by Jewish Temple’ 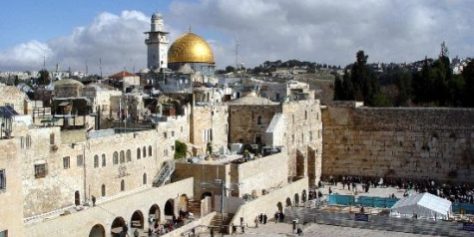 Archaeologist Asaf Avraham, former director of the Jerusalem Walls National Park of the Parks Authority, is a guest of the opening conference of the Knesset lobby to strengthen Jewish ties to the Temple Mount heritage.

At the event Avraham is expected to expose data and evidence that suggest that the Dome of the Rock was inspired by the Jewish Temple. In an interview with Arutz Sheva he encapsulates the research to be discussed in the conference:

“The lecture is a continuation of a previous lecture four months ago when I published a finding of writings from a thousand years ago, writings from the Muslim village Nuva next to Hevron, which mentions the term Sachrat Beit El Maqdis, which translates: ‘Rock of the Holy Temple’.

According to Avraham this finding which was uncovered months ago “joins with evidence from early Muslim literature which defines the Dome of the Rock as Beit El Maqdis (Beit Hamikdash)”.

“I and my colleague Peretz Reuven showed that at the beginning of the Islamic period the structure of the Dome of the Rock was attributed to tradition that clearly drew from the Jewish faith, with the ritual focus of the structure being the foundation stone. The direction for prayer was then facing towards the foundation stone until a very recent time. Paintings from the end of the 19th century show worshipers kneeling toward the Foundation Stone and not towards Mecca. There is no doubt that the original source of the place’s holiness is the Temple,” says Avraham.

When asked whether according to his understanding the construction of the Dome of the Rock was precisely coordinated with the Temple’s geography, Avraham responds emphatically, “No doubt. When Muslims arrived in the seventh century, and probably even before that, they absorbed the Jewish faith which then entered the Muslim faith. You see it in the Koran which is heavily laden with biblical stories. Muslim perception as a whole is a monotheistic conceptualization that matches the Jewish faith and there are many examples of this.

“Even the building’s construction exactly in the place of the Holy of Holies was aimed at preserving the memory of the sanctity of the place,” says Avraham, explaining that replacement theology, namely the belief that their religion replaces the Jewish religion, a belief known mainly in relation to Christianity, also became the inheritance of Islam. “The first Christians saw themselves as the new Jews and this phenomenon also affected the Muslims, who saw themselves as carrying on the traditions of monotheistic faith and the true followers of the Bible. Muhammad was considered to be the Messiah, and they hoped that the Jews would cooperate with them. At the beginning of the period Jerusalem was the declared direction for prayer and the central fast was Yom Kippur, but when the Jews did not cooperate they changed the direction of prayer to Mecca. This is not a surprise, but the strengthening of an existing theory.”

Avraham continues by adding: “Until the Muslim period Jews were severely restricted from dwelling in Jerusalem, let alone access to the Holy Places, and after the Muslim conquest Jerusalem was opened to Jews. Jewish influence in the process of Muslim entry into Jerusalem was huge. The story is known about the character Caab al Habr the Jew, who led the ruling Omar Ibn Khattab on a tour of Jerusalem and the Temple Mount, where Caab al Habar explained to him sanctity of the place and following the meeting it was decided on the construction of the buildings on the Temple Mount. Nothing is hidden. Even Muslims recognize the Jewish influence on the development of the place and its sanctity since the beginning of the Muslim era.”

What about current Muslim claims that the there is no historical basis to the existence of a Jewish Temple on the Temple Mount? “The denial is quite modern beginning with the establishment of the Zionist movement and the desire to separate from the renewed Jewish aspiration for independence to the Muslim world of belief.”

Avraham stresses that everything he says and all the ideas presented at his lecture are not his. “These are not ideas I formed myself, but that rely on famous people’s studies of the Muslim era. It is not my discovery. My discovery is the writing sample from the village of Nuva previously unknown in Western scholarship. This is further evidence that strengthens the matter, as well as other findings such as Muslim coins with a seven-branched menorah and other findings.”

Regarding the expected response of the Arab MKs and contemporary religious Muslims, Avraham says: “I am not a politician. I come to present the facts as they come out of the ground. In addition, Muslim heritage should also respect itself and see how this heritage is connected to their faith today, but all these are political and social issues that interest me less.”